The construction industry has always been a dangerous industry in which to work, characterised by poor health and safety provisions. This was particularly so in the post-war decades, when deaths and injuries rose to very high levels and health and safety regulations were almost non-existent. For example, in 1961, there were 264 deaths in the industry, with over 23,000 injuries. In 1968, the number of fatalities was 288, with accidents by that point hovering around the 40,000 a year mark.

Many of the workers we interviewed pointed out that health and safety systems were absent on most building sites in that era, and gave examples of operations that were exceptionally dangerous. This included steel and crane erectors working at several hundred feet in the air without harnesses and hazardous diving work for untrained workers during the building of Sizewell A power station. The Health and Safety at Work Act was not passed until 1974 and although this marked a step forward in the quest for safe working conditions on construction sites, its inadequacies can be seen by the fact that deaths, injuries and extremely unsafe and dangerous working conditions remained at high levels in subsequent years and continue to be a major problem in the construction industry today.

In this clip, George Garnham speaks about asbestosis, and its impact both on former colleagues and a member of his own family. For legal reasons, construction company names have been bleeped out in this extract.

In addition to the deaths and injuries that took place on sites, one other consequence of the poor health and safety provisions in the construction industry has been the development of debilitating and sometimes fatal occupational illnesses, which usually take many years to appear. These include a wide variety of respiratory diseases, permanent damage to hearing and vision, and hand-arm vibration syndrome. Some of the workers we interviewed are currently suffering from serious occupational illnesses, including Chronic Obstructive Pulmonary Disorder (COPD). Others have witnessed the deaths of many former work-mates and family members from one of the worst of the occupational illnesses to affect construction workers—asbestosis. Despite the links between asbestos and fatal lung disease, which were recognised by the medical profession and government long before the Second World War, the material continued to be used throughout the boom period of construction during the post-war decades. Those who worked in engineering construction were particularly vulnerable, but the material was extensively used in all branches of the construction industry, on all types of projects, until well into the 1980s. As a result, asbestosis continues to hang as a death sentence over many construction workers and their families all over Britain today. 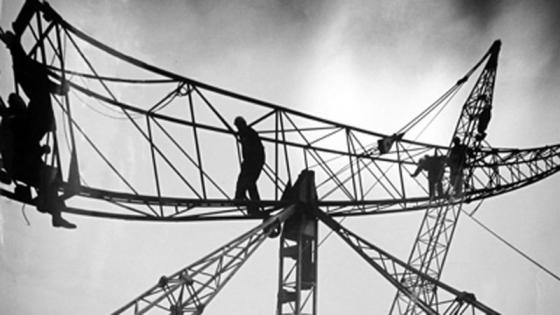