Blacklisting has a long history in the British construction industry. For generations, many workers who have been involved in building trade  unions, or who have raised concerns about wages and conditions on the sites where they worked, have become victims of a well-organised, but secret, process of exclusion from the industry. In some instances, simply having worked on a particular site where strikes or disputes took  place was enough of a reason to be blacklisted. The hidden nature of the practice made it difficult to prove, but its existence was an accepted fact. Many leading construction companies operated blacklists.  They supported organisations such as the Economic League, which collated and provided information on trade unionists to employers. The recent  scandal involving the links between some of the largest construction  companies in Britain and the blacklisting body, the Consulting Association, shows that it is a practice that is still very much alive  in the industry today.

Several of the ex-workers we interviewed during the research were  blacklisted. This included many who worked on the Barbican re-development. Some recounted times when vacancies were suddenly filled, only after they had expressed an interest, and how on the few occasions they got past this point and arranged for interviews, the jobs were gone by the time they reached the site.

In this clip, scaffolder Michael Houlihan recalls how he was blacklisted following the 1966-1967 lock-out on Myton’s Barbican site.

One recalled his locallabour exchange, phoning for a job on his behalf, being told by a major  construction company that on no account would he ever be hired on any of their sites anywhere in the United Kingdom. These accounts showed the  human cost of this pernicious practice, which continues to blight the lives of building workers and their families today. 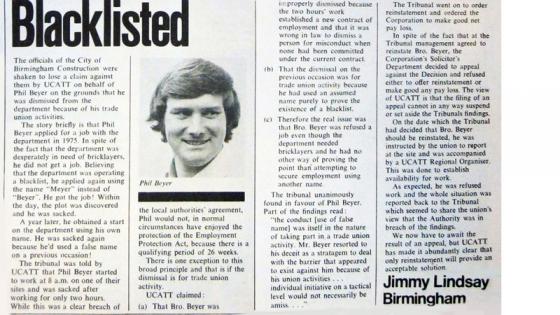 There was no systematic, regulated training system for the construction industry until the formation of the Construction Industry Training Board (CITB) in 1964

The key characteristic of the building industry before the second world war separating it from many other industries, including manufacturing, was adherence to the time-based wage