The birthplace of British cinema 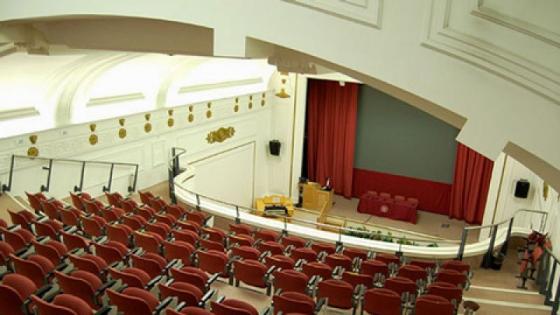 The theatre at 307 Regent Street was opened in 1848. Originally part of the Royal Polytechnic Institution, it was designed to show large-format magic lantern slides and other ‘optical exhibitions’. It seated 1000 people in two tiers, and shows ran twice a day.

When Quintin Hogg took over the building in 1882 he used the space both for teaching and for public lectures and entertainment. On 21 February 1896 the theatre was rented out to the Lumière brothers for what was to be the first showing of moving film to a paying audience in Britain. There were occasional screenings of ‘animated photographs’ after this, but the next regular performances to take place were Alfred West’s Our Army and Our Navy propaganda films in the run up to World War One.

After the war, the theatre was rented out for the purposes of ‘High-class cinematograph entertainment’. Lesees were required to ‘exhibit films mainly of an educational and cultural type’ that fitted in with the general work of the Polytechnic. As a result a great number of travel and nature documentaries were shown between the wars, alongside occasional continental films such as Fritz Lang’s Destiny (Der müde Tod).

In 1939 the Polytechnic Theatre, as it was then known, moved to showing continental films full-time, with Les Disparus de St Agil the first foreign language film to be shown. From 1941 it was used as a news theatre, but in August 1949 the owners took out a notice in The Times to say that the Polytechnic Theatre was to ‘be a shop window for continental films of recognised merit’. The premiere of Le Secret de Mayerling in the presence of the French ambassador was held the following month. However within two years the now Cameo-Polytechnic Cinema was to show the first X-rated film in the UK and gradually developed a reputation for programming of a rather daring nature.

The last public cinema screening seems to have taken place in early 1980, after a short-lived run as The Regent Theatre, and the space reverted to the Polytechnic of Central London (now the University of Westminster) in April 1980. Fundraising is currently underway to see the space restored to its former glory, evoking its 19th century heritage and bringing it right up to date with the latest technology, making it accessible and available to tomorrow’s filmmakers, the film industry and audiences. It will reopen in early 2014.

Read about the Centre for Law, Society and Popular Culture's academic staff and up-to-date details of our research outputs.

See the range of publications relating to the Centre for Law, Society and Popular Culture.

Find out about the range of activities that we carry out in the Centre for Law, Society and Popular Culture.