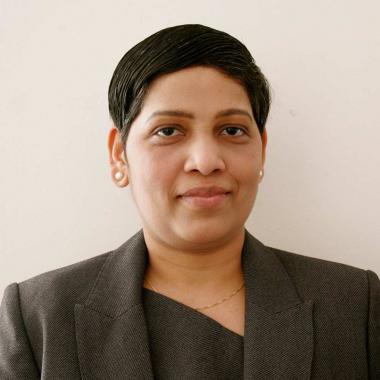 Connect with me
WestminsterResearch Other
I'm part of

Dr Kalpana Surendranath is a molecular cell biologist with research expertise in the areas of CRISPR human genome editing, programmed cell death, DNA repair, antibody production and protein engineering. Through a national level selection Kalpana  joined the 2 years  postgraduate program  in Microbial Gene Technology at the Madurai Kamaraj University, India where she got introduced to gene targeting, plasmid mapping and cloning and overexpression of industrially important microbial enzymes. She is a recipient of lectureship and research fellowship from the honourable ministry of Centre for Scientific and Industrial Research (CSIR) India.  After completing PhD at the Indian Institute of science (IISC) one of the top premier multidisciplinary research institutions in India, she worked at the Institute for Molecular Cancer Research in Switzerland where she made significant contributions in the field of DNA replication and DNA mismatch repair. She is distinguished for her pioneering studies in the cell death signalling and toxicity neutralization studies of Abrin, one of the most potent toxins in nature and had cloned, mutated and characterized several genes  involved in DNA replication and mismatch repair. In particular, her work in the Baculovirus expression of human mismatch repair multiprotein complexes have supported the work of researchers within and outside the University of Zurich. At the University of Westminster, her current research focus is to investigate the cellular role of RNA binding proteins and the molecular interactions upon DNA damage and repair.  She is keen in collaborations and actively collaborates with the Francis Crick institute and Institute of Molecular Cancer research in Switzerland, and is committed to conducting cutting-edge research that is reflected in the list of published work.  At present, work is in progress to utilise the novel CRISPR genome editing technology to assess the potential use of molecular DNA repair networks as targets in anticancer therapy. She is also keen in the establishment and validation of 3D cellular models of human diseases particularly cancer. Dr.Kalpana is a member  of UK Pharmacogenetics and stratified medicine network and science writers club (http://www.sciwri.club/). Notably, Kalpana  has been chosen by the university to undertake the Aurora women leadership training organized by the leadership foundation in Higher education(LFHE) and is currently serving as a Aurora role model.

The major goal of our lab is to train and develop researchers in the methods and reasoning necessary to investigate complex problems of molecular and cellular biology. The specific projects are based on DNA repair networks, and researchers joining the laboratory are encouraged to develop a project based on them or to develop something new.  We encourage collaborations and multidisciplinary approaches as indicated by the range of techniques and procedures utilised in the lab.

The experimental approaches used are based on the wide range of methodologies available for using cell lines as models for human diseases. The laboratory is currently involved in the development of a number of these methodologies including CRISPR genome tagging and gene deletion, DNA repair and COMET based diagnostic assays. Given the significance of CRISPR and the fast evolution of DNA repair targeted anticancer therapy the research in the  lab aims at the improved understanding of DNA repair networks that underlie specific aspects of  human diseases in the exploitation of detailed accounts of such networks in the treatment of human diseases particularly cancer. The areas of current research in the lab are listed below.

The human genetic material is continually subjected to damage, from both endogenous and exogenous sources. To survive and eliminate such damages incurred, cells are equipped with a variety of repair processes that are specialised to recognise different types of lesions in DNA. Inability to fix the damages is linked to perturbed DNA damage response and repair pathways and in turn is commonly associated with tumor development. Notably, DNA repair pathways enable the tumor cells to survive the DNA damage induced by chemotherapeutic drugs. Recent evidence suggest that reduced function of DNA repair pathways could serve as targets for single-agent therapies and the potential to minimize the side effects. Our lab is interested in exploring the potential use of small molecule inhibitors of DNA repair pathways in both single agent combinatorial therapeutic approaches. The focus is currently on recently approved drug Olaparib that targets cancers arising from hereditary BRCA1 and BRCA2 mutations which lead to various types of cancers. Although the association of BRCA1 and BRCA2 mutations with breast and ovarian cancer is defined the links between the defect in these genes and other cancer types still remains unclear. Efforts are ongoing to test the efficacy of Olaparib analogs in breast and non-breast cancer cell line models of human cancers.

DNA damage response network plays crucial role in counteracting the damage to DNA caused by endogenous and exogenous sources the maintenance of genome integrity. Interestingly several RNA binding proteins (RBPs) have been shown to be recruited to the sites of damage and to play significant role in the prevention of and repair of DNA damages. Several studies in the past provide evidence forthe central role of RBPs in the regulation of mRNA fate and that dysfunctional RBPs lead to various disease pathologies including neurodegenerative disorders, cardiovascular diseases, and cancer.

In addition to binding RNA species, RBPs interact with various functional proteins, suggesting yet to be discovered roles in cellular processes including the maintenance of genome integrity. Studies in our laboratory on ZFP36L1, a zinc finger class RNA binding protein suggest a link between ZFP36L1 and molecular networks of replication and DNA crosslink repair. In collaboration with the University of Zurich and the Francis Crick institute work is in progress to utilise CRIPSR technology to generate stable knockouts of this particular gene and understand the multifaceted nature of RBPs. We hope that this effort will provide insights in to the multilayered maintenance mechanisms governing genome integrity in diseases that are linked to DNA damage, such as cancer.

Efficiency of DNA repair is a determining and decisive factor for cancer progression as well as the response to anticancer therapy. Therefore, using our current expertise we aim to assess the possible applications of DNA repair molecules as biomarkers to monitor cancer development and tumor progression. One of the molecules of interest is H2AX, a key regulator of DNA damage response in several cancers. Owing to the sensitivity of detection and the abundance of the molecule H2AX is believed to be a useful candidate in cancer diagnosis. We are also working towards the establishment of COMET assays in the early detection of cancer in high risk populations.