The key characteristic of the building industry before the second  world war separating it from many other industries, including  manufacturing, was adherence to the time-based wage. The construction  wage system changed in the post-war period, however, as bonus, or  incentive payments, became an increasingly important part of a  construction worker’s wage, following its incorporation into the  national wage agreements in 1940 and its permanent retention in 1947.  Some occupations and some sites continued to operate a slightly higher  hourly rate, with no bonus, but on many sites, and among many  construction occupations, the bonus became a critical issue.

Different types of bonus system operated, ranging from site bonuses  to collective bonus to individual bonus. Collective or site bonuses were  often seen by workers as more conducive to site solidarity, whilst  individual bonuses could be divisive. From the employers’ perspective,  bonus was believed to be a means of: exerting more control over the  labour process; increasing productivity; and recruiting skilled  labour—an important consideration given that this was a period of boom  in the construction industry, which led to shortages of certain types  skilled workers in certain areas. In practice, however, bonus targets  were often arbitrary and were a key factor in the instability of the  wage system. Not surprisingly, they lay at the heart of many industrial  disputes in the industry during these decades.

In this clip, Bob Hooper recalls the bonus system that operated for bricklayers in Stevenage during the 1950s and 1960s.

Our research shows the importance of bonus to the wages of  construction workers. Many of the ex-workers we interviewed spoke in  detail about the variety of bonus systems that were in operation, the  opportunities they sometimes created for a high wage and the problems  they often caused. Some, like the Stevenage bricklayers, also showed  their solidarity with fellow-workers by supporting and operating systems  that offered an equal rate of bonus to the labourers they worked  beside, and on whom they were dependent. 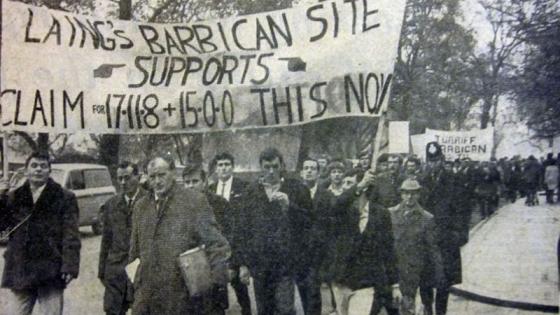 There was no systematic, regulated training system for the construction industry until the formation of the Construction Industry Training Board (CITB) in 1964