To mark LGBTQ History Month, the University hosted the talk about the changing experiences of gay soldiers in Britain at our Regent Street Campus. 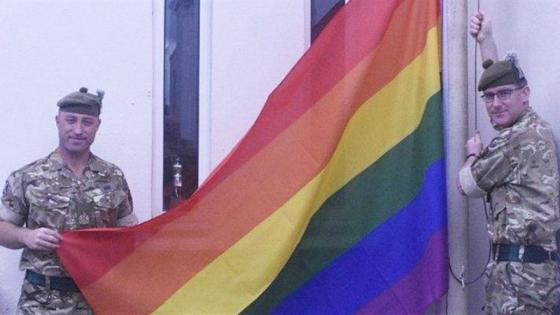 The talk, ‘The Gay Soldier in Britain after 1982: and the Masculine Military Ideal’ was organised by Professor Pippa Catterall, Professor on the History and Politics BA Honours course.

Drawing on oral history interviews, Lee Arnott, a Researcher PHD Student at the Imperial War Museum in collaboration with Birkbeck College, explores what it meant to be a gay soldier in a time of societal and structural change.

The work asks the question: How has the British Army moved from rejection to acceptance of homosexuality in its ranks since the Falklands War? The project is also looking at masculinities and how they are performed: what strategies did gay soldiers use to hide their sexuality? How were boundaries maintained? How did they live up to heterosexual ideals? What stresses were unique to a gay soldier’s experience? In this light, the accounts of female soldiers will also be considered as women too, had to try to live up to the masculine ideal of the soldier.

Arnott said about his research: “My work focuses on the experiences on gay soldiers in a time of change for the British Army as the institution moves from homosexuality being illegal to the ban on gay soldiers being lifted in 2000.  There is quite a lot of literature already on the experiences of RAF and Navy personnel, but male voices from the Army (and especially its recent history) are largely silent. With this oral history project, I’m hoping to redress the balance.”

The talk was followed by a Q&A and many ex-services personnel were in attendance.