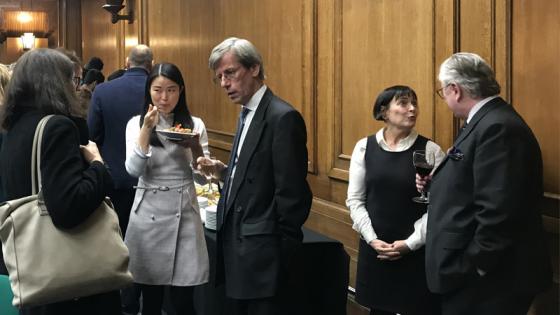 We hosted the fourth annual lecture of Sir Richard Arnold, this was the first time he had been back to visit since his elevation to the court of appeal and he is, we believe, our only alumni to become a Court of Appeal judge.

Pippa Catterall hosted Dr Victoria Levinskaya from Westminster International University in Tashkent on a visit to the University of Westminster on 21-28 January as part of their current research collaboration on the changing role of Mahalla in Uzbekistan. A highlight of the visit was the seminar hosted by Pippa on ‘Community, Democratisation and Identity in Central Asia’ at which Victoria spoke about the role of Mahalla in Uzbek society and public policy and Hewa Khdir (University of Salahaddin, Iraq/University of Winchester) explained the social impact of state-building processes in Iraq since 2003. Pippa also gave an address a lunchtime practitioner seminar on ‘Queering Public Spaces’ at Arup on 26 February.

We continue to attract some great guest speakers to our classes. In January and February this included LLB and LLM Entertainment Law alumnus Nick Kadrnka (Sony Music), Joe Cannon (Barrister, Cornerstone Chambers) and Josh Jaskiewicz (Sheridans Solicitors). In addition, Steve Greenfield organized a trip to the Tottenham Hotspur Stadium for his LLM students

Finally we ran a very successful Ghost Gig in the Soho Poly Basement in February, featuring a recording of Michael Claire, 50 years to the day since the original performance took place. We have three further ghost gigs coming up over the next two months.

Find out more about information on the Ghost Gigs and Found Sounds projects.