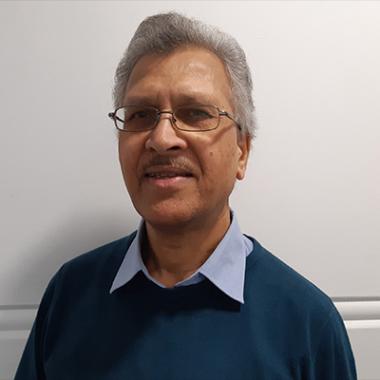 I have been a full-time member of staff at the University of Westminster since 1991. I have taught a number of courses including Descriptive and Theoretical Syntax, First and Second Language Acquisition, and Psycholinguistics, at both undergraduate and graduate level, and was from 1997 to 2004 the head of the Linguistics Section. Before taking my full-time position at Westminster, I worked at the University of Manchester Institute of Science and Technology as a Research Associate, and taught part-time at the University of Salford.

My main research interests lie in the areas of theoretical syntax, syntax of creole languages, the creole language of Down's Syndrome children and adults, and language mixing at the level of grammar.

Exploring Language is a module in which I discuss issues relating to descriptive and theoretical syntax.  I introduce students to Chomsky's transformational generative grammar.

In Language Structure and Meaning I introduce second year students to Chomsky's (1981) Lectures on Government and Binding, and examine publications within the Principles and Parameters framework.

In Language Form I discuss Chomsky's Minimalist framework, looking at issues to do with architecture of the syntactic model, derivation, feature checking and economy issues.

All these modules teach students not only valuable knowledge but also valuable  transferrable skills to do with data description, analysis, and interpretation, as well as presentation and argumentation.

My current research projects include a description of the grammars of English-based creoles, the grammatical development of creole-speaking Down's Syndrome children and adults, and language mixing between creoles and Bhojpuri (an Indian language) in former colonies with a large Indian diaspora.

I am the author of two books, a number of book chapters, and several articles in peer-reviewed journals such as Theoretical Linguistics, Linguistics, Journal of Pidgin and Creole Languages, and Acta Linguistica Hafniensia. I have also co-edited, with the late Dr Philip Baker, a book on grammaticalisation in creole languages, Changing Meanings, Changing Functions (University of Westminster Press, 1996). My two books are: The syntax of Mauritian Creole (Bloomsbury Publishers, 2013) and A comprehensive and comparative grammar of French-based creoles (Routledge 2017). I am currently working on another book: A comprehensive and comparative grammar of English-based creoles.

I have experience of doctoral supervision, both as main and joint supervisor. I would welcome applications for doctoral research in the area of syntax, including the syntax of creole languages.

I am also a member of the Society of Pidgin and Creole Linguistics, and of the Linguistic Association of Great Britain.