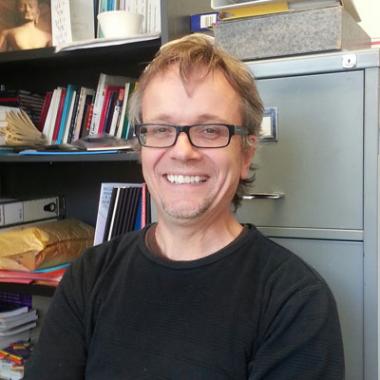 RS 504 Semester One: Tue 12-14 or by appointment
Connect with me
WestminsterResearch
I'm part of

My chief interests are in early modern literature, the concept of disenchantment, and the German tradition of philosophical aesthetics.

I started in my permanent post at Westminster in August 2010 and am currently a senior lecturer in English Literature.

I have given around 40 papers on varied literary and theoretical topics. Universities I have spoken at include: Cardiff, Cyprus, Essex, Helsinki, Jyväskylä, Leeds, Manchester Metropolitan, Melbourne, Newcastle, Sunderland, Tampere, Westminster and West of England. In 2009 I was an invited plenary speaker for a conference on Paul de Man at University of California at Irvine. More recently, I have delivered papers at the University of Edinburgh, at Royal Holloway, London, and Kingston University as well as at Westminster.

Currently I am teaching on the following undergraduate modules:

What is Literature?, for which I am module leader, runs through the year at level 4 and introduces students to a range of forms and genres of literary work, from the late Elizabethan to the contemporary period. The module relates formal issues to the political and cultural milieux of these works, the controversies in which they intervene. The module also considers the concept of literature as such, reflecting on the notion and constitution of the canon as well as challenges to or redefinitions of it.

Writing Revolutions, for which I am module leader, runs in semester one at level 5.This module addresses the literary innovations of the 16th and 17th centuries and relates these developments to the period’s central religious, social and political upheavals. The module examines an array of literary and theatrical experimentation, emphasising works of the late Elizabethan period through to the English revolution. It is organised in three thematic groups: religion, the social individual, and power and politics. The themes identify the transformations not only inspiring new formal experimentation in verse, prose and drama but also influencing changes in literary culture more generally, such as the establishment of the professional playhouse and the development of women’s authorship.

At Westminster, my undergraduate teaching has mainly concerned early modern topics, including a level 6 option on John Milton, although I have also taught Romanticism and Theory classes and supervise level 6 dissertations on various subjects.

I am especially interested in the Early Modern period and in critical theory and philosophical aesthetics. My research focus is genealogical, exploring Early Modern treatments of the senses and matter, of giving and exchanging, of ethics and law. I take these topics as both sources of modern reasoning and vital sites of that reason's contestation, its irrational ferments. I am interested in the question of experience's necessary embodiment and I consider the media of artworks, verbal or non-verbal, as a clue to the modern evacuation of the subject (of its social and somatic conditionality and embeddedness), and to contemporary efforts to contest it. That interest hopes to link up with research on both the cognitive purport of more modern artworks and post-Romantic aesthetic thought more generally.

The role of theological thought and religious practices in the earlier period has recently moved to a more central position in my work, as anticipated in my account of George Herbert's critical relation to ascetic tradition -- an essay that  argues that theological commitments are inseparable from the verse's shaping by, and refusal of, emergent economistic thought (PhiN 65: www.phin.de). More generally, I see in debates around grace, for instance, or iconoclasm, important disenchanting moves, from the nuanced and critical to the delusional.

My recently completed book, 'Any Shape but That': Macbeth, Disenchantment, and the Dead (2020) reads Macbeth in light of this Weberian theme, and deciphers, perhaps counter-intuitively, through the play's mortification of a murderous agency, a representation of an expanded reason, rather than a sceptical upending of knowing. The play pits expressions against intentions, contexts (affective, social) against legalism, living embodiment against evacuated data -- theatre against murder. It thus thematizes and resists the irruptive or antitheatrical authority of divine gratuity, which it associates with other abstractive and dominative processes. I elucidate this genealogical import with the help of Adorno's account of Enlightenment reason.

My other publications include: William Empson: The Critical Achievement (1993) and Adorno and Literature (2006), volumes of which I was co-editor. A monograph, Paul de Man: Rhetoric, History, Aesthetics is forthcoming from Polity Press and another, Early Modern Disenchantments, is in preparation.

I would welcome students needing PhD supervision in any of the above or related topics.