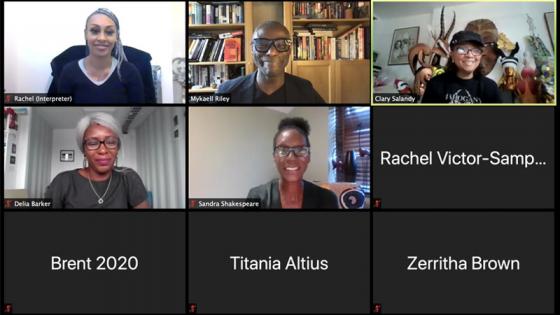 The webinar, organised by Brent 2020, is centred on the voices of four Black leaders in the cultural sector who discussed the implications of the recent Black Lives Matter protests on the cultural sector and how both emerging and established figures can use their influence to affect change.

As well as sharing their thoughts on recent events, the panellists discussed their career paths in the performing arts, carnival arts, music and academia, and their insights on navigating conversations about race in the workplace as creatives and artists.

The talk covered the implications of this iteration of Black Lives Matter on cultural institutions and the creative sector, the panellists’s career paths as cultural leaders, and allyship and accountability in the cultural sector. The panel discussion was followed by a Q&A where participants were able to ask questions from the speakers.

As the Director of the Black Music Research Unit, Riley has led the research ‘Bass Culture’, a three-year academic project exploring the impact of Jamaican and Jamaican-influenced music on British culture. The project, which covers the period from the 1960s to the present day, explores the profound ways in which the island’s music remade popular music in Britain.

Those who joined Riley on the panel were Clary Salandy, a carnival artist, theatre designer and three-dimensional design tutor specialising in large scale body sculptures, and Delia Barker, the Programmes Director at the Roundhouse, a live music and performance space which is also a charity using creativity to transform, inspire and change the lives of young people aged 11-25. Moderating the session was Sandra Shakespeare, a Museum and Heritage

Brent has been selected as The Mayor’s London Borough of Culture for 2020. The Brent 2020 programme explores the stories, art and emotions that hold life in Brent together, uncovering and celebrating its untold tales and unheard voices. The Brent Artist Network supports connection, collaboration, and resilience in the local cultural sector. The

Riley said about the webinar: “Throughout the discussion there was unity in the notion that change was overdue – and that it had to be driven top down within institutions.”

Find out more about the Brent 2020 programme.