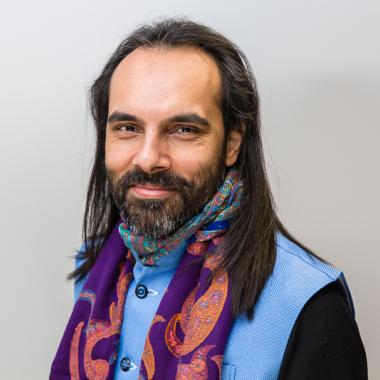 While my primary role is as the Head of Department of Politics and International Relations, I am often considered as a curious scholar, a lifelong student, a passionate lecturer, or a public intellectual.

I joined University of Westminster in 2007 as a Reader (Associate Professor for those used to the non-British system) in International Relations. I moved from University of Bath where I was a lecturer. I did my PhD (1998-2002) from the Department of Politics at University of Bristol and the topic was related to Western representations of Tibet and its political and cultural significance. I have never been comfortable within a discipline. While my MA was in International Law and Politics at the University of Hull (1997-1998), the Bachelors was in History from St Stephen's College, University of Delhi. I could not have pursued my Masters and PhD without scholarships. While the MA was sponsored by British Chevening scholarship, the PhD was made possible due to University of Bristol and Overseas Research Scholarships.

I have shifted places and disciplines, I have experienced elite and non elite as well as religious and secular education, my ideas emerge as much on Facebook as it does in structured scholarly forums, I indulge in concepts as much as in every day politics. What has remained consistent so far is my desire to produce scholarship that is meaningful to groups and peoples who are often marginalised, minoritised, occupied and suppressed. This desire comes across in my research, academic writings and public engagement on topics including politics and international relations of Tibetans rendered stateless with Chinese rule, Islamophobia in India, majoritarian nationalisms, politics of security and representation, ethnic relations in Zanzibar, emergence of China and India as major non-Western powers as well as contested nature of nation-state formations in China and South Asia, Bhutan's international affairs, and the Kashmir conflict.

I have authored monographs Geopolitical Exotica: Tibet in Western Imagination, Tibet: A Victim of Geopolitics, and Hindu Nationalism in India and the Politics of Fear and published a number of chapters in edited collections and articles in journals. I am currently working on two different manuscripts - one on the disputed Himalayan border of China and India and the other on competing perspectives on Tibetan history, present and future.

I have a significant presence in popular media and a google search for my name links to a range of forums including comment articles in The Guardian, YouTube videos, cited expert views in newspapers of the USA, UK, China, India and Singapore, and blogs.

I feel strongly about ethical and engaged scholarship and took over as the Head of Department mainly because I felt I could make a difference to the lives of our students.

Teaching involves thinking, articulating, performing, communicating, listening as well as rethinking. It is not a product-knowledge-that I seek to deliver through my lectures or seminars; rather, it is a process in which I am as much of a learner as a learned.

The two main modules that I lead and lecture on are '1ISP7C5 Global Change: Toward a Non-Western Order?' (postgraduate) and 'SPIR613 Postcolonial Politics: India and China' (final year undergraduate). They deal with politics and international relations of the postcolonial world with emphasis on the emerging powers of China and India. I also deliver lectures on first and second modules with emphasis on IR theory, nationalism and identity politics. While most of my energy as the Head of the Department goes in management, I am committed to maintaining direct connection with students through teaching. Interaction with students gives me a sense of purpose. My students, including those who may sometimes not like the topics I cover, never doubt my passion for teaching.

A significant part of our teaching is supervising dissertations of undergraduate and postgraduate students. The dissertations I have supervised cover topics ranging from multiculturalism in Denmark to patrimonial state in Nigeria, from Iran-USA relations to corruption and nationalism in India, from the Roma problematique to Chinese minority policies, and so on. Rather than impose my ideas on the students, I emphasise on helping them work better and with rigour on what animates them. I prefer supervising students who are willing to work hard.

By the time I joined Westminster in 2007, I published Geopolitical Exotica: Tibet in Western Imagination with University of Minnesota Press. This was based on my doctoral and postdoctoral research. It was republished in 2009 in South Asia where the bulk of Tibetan exiles live as Tibet: A Victim of Geopolitics. A revised version was translated by the Party School of the Central Committee of the Communist Party of China in Beijing, but there has been no progress on its actual publication. This body of my research provided postcolonial critique of colonial practices that shaped Tibet as an international problem and engaged with the politics of identity and representation in the Tibetan diaspora. I have argued that both Western ideas and practices are complicit in Chinese control of Tibet.

In recent years, my research shifted the focus to a critical analysis of China's public diplomacy and the conversion of Tibet into 'China's Tibet' and Reaktion Books have commissioned me to write a book on the contested pasts and futures of China and Tibet.

I have researched on the cooperative and competitive relations between China and India with special reference to the border dispute and differing attitudes toward Tibet. It also engages with the significance of China-India relations for other peoples and countries in the Himalayan region, especially Bhutan and Kashmir. I am currently completing a monograph on the border dispute and its significance for the Himalayan region.

I have done extensive research on rightwing majoritarian nationalism in India and published several articles and a book Hindu Nationalism in India and the Politics of Fear. I conceptualise the phenomenon as 'pornonationalism', as violent, and as the biggest threat to the secular idea of India as a democracy. I am rather pro-active in my public engagement activities, through organising events, hosting delegations and social media. The most prominent event was the Dalai Lama's visit to the University of Westminster in 2012. I also organised a public event on Kashmir and Tibet, involving two prominent dissident intellectuals: Wang Lixiong from China and Arundhati Roy from India. Most of these events are recorded and available via youtube. My social media activities have been extensive and my facebook is more political than social.

In the future, I see myself as focusing more on a comparative study of colonial practices embedded within the postcolonial states of China, India and Pakistan with Tibetans, Kashmiris and Baloch as case studies.

Principal Investigator in BA-AHRC-ESRC Visiting Fellowships for South Asia and the Middle East to work on a collaborative project (with A. Ghosh) titled 'The Politics of Performance: the Uses of Spectacles for Political Mobilisation in Contemporary India', 2008.

D Genovese ''The Tragedy of Islamism in Britain: A Fetishism for Politics' (Director of Studies), Completed.

Keynote speaker on 'The New We and the Old Is: Multitude of Minorities that is Europe', Learning to Live in a Multicultural World, Initiatives of Change Caux, Switzerland, July 2011. Audio available at http://www.caux.iofc.org/en/node/56832.