Students from the Film and Animation BA Honours courses have walked away with wins in the Best Drama and Best Sound categories, while Television Production students were nominated in the Factual category at this year’s Royal Television Society Student Awards which took place on Wednesday 6 February. 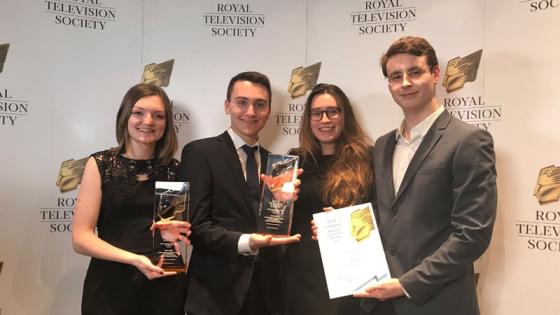 Just Josie, a short film made by students from the Film BA Honours course, scored the top spot in the Best Drama category.

Put together by Georgina Rowlands, Ben Porro, Osian Pearson, Lily-Evelina England and Nathalie Carraro, the short sci-fi comedy relates the life of Josie Parker, a young girl who gets, one day, abducted by aliens. When her disbelieving family maintain that she’s not interesting enough to have been taken in the first place, Josie decides to change her image to entice the aliens back to Earth.

RTS judges praised a ‘simple, well told story beautifully put together with the right amount of humour’ qualifying the short film as a ‘heartwarming and professionally put together piece’.

Peter Hort, Course Leader for the Film BA Honours course, said: “This is a really well deserved award, which recognises the hard work and creativity of a team of fifteen final year students, supported by a similar number of second years. They collaborated wonderfully to create a film that will resonate with audiences as it goes to festivals around the world.”

Following the successful release of ‘Just Josie’, Director Ben Porro and Producer Georgina Rowlands were recently offered work at Zinc Media and have just received their first BBC2 credits as a junior production coordinator and edit assistant on Inside Europe: Ten Years of Turmoil on BBC2.

Students from the Animation BA Honours course received an award in the Best Sound category for their film Feed Your Demons, a stop-motion short film about a young boy who stumbles upon a mysterious box in the attic. The film was directed by Daniel Jonsson and Evann Nyack, in collaboration with Liam Iliffe, Mateo Donoghue and Nathan Da Conceicao who managed the sound and music and Karen Bai who designed the costumes.

Speaking about their success, the awarded students said: “We are so pleased to have received the Best Sound RTS award for Feed Your Demons. It is an amazing achievement and we feel really honoured to have been rewarded. We are very grateful to all the people who have contributed to the film and appreciate the support the University and our Course Leader have given us throughout the process.”

Stephen Ryley, Principal Lecturer on the Animation BA Honours course, said: "We were so pleased that the RTS selected one of our animation films to receive the best sound award, because great sound is essential to the success of any film. Animation, in particular, requires very skilful sound design crafted with great care, because (of course) there is no innate noise to capture during the production itself, apart from the click of a shutter, the squeak of a mouse, the scratching of a pencil, and the occasional expletive, none of which would be entirely suitable."

The short film was also nominated in the Animation category alongside two other entries.

In addition to the two awards, the University of Westminster received a nomination in the Factual category for The Crowds of Chernobyl, a short film put together by Television Production students Maria Koszolko, Jamel Taylor, Daniel Williams, Alina Burakova and Alexandra Lomteva.

The Crowds of Chernobyl is a short documentary film about what might make people want to visit the world’s most famous radioactive exclusion zone.

Speaking about their nomination, the students said: “We were all thrilled about the nomination, it was great to have our hard work recognised. Even though we didn't win we are grateful to have been selected and very proud of this project.”

Television Production Principal Lecturer Jane Thorburn added: "The jury for the Factual category remarked that the standard of the documentaries this year was exceptionally high and that any of the nominated programmes could be shown on Broadcast TV. I was particularly impressed that our BA Television production students produced such a well-structured, atmospheric and adventurous documentary working in adverse conditions in the Ukraine."