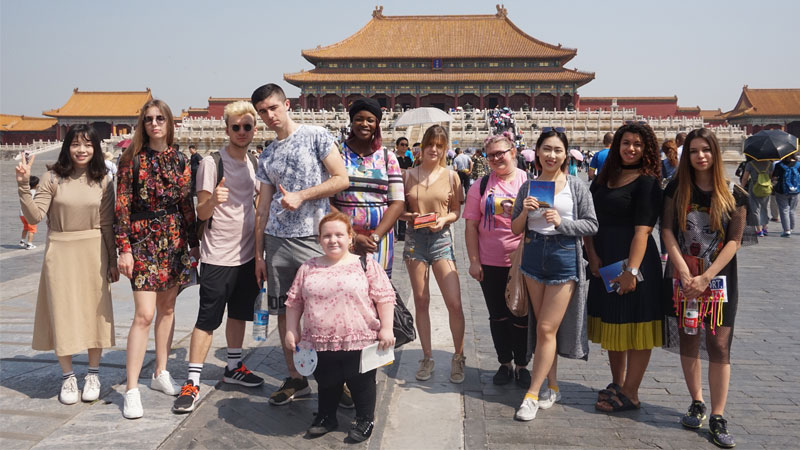 During the trip, students were not only able to explore Beijing and experience living in China but could also benefit from media-related classes, such as News Reporting and Writing, Mass Communication Theory and Cross-cultural Communication, which they attended together with Chinese students.

The Buddy Programme, which paired up each visiting student with a Chinese peer, allowed Westminster students to get a better insight into the local customs and culture, provided invaluable help moving around Beijing and formed friendships.

One of the students said: “I loved the buddy programme, I really got on with my buddy and she was really friendly and helpful. I think it's a nice way to get first-hand information about what it's really like to live and learn there. I am definitely going to keep contact with her.”

As part of the trip, Westminster students were allowed exclusive access to China Global Television Network, a multi-language, multi-platform media grouping, a subsidiary of China Central Television (CCTV), where they were given a tour of all facilities by a CGTN reporter who is also an alumnus from BFSU.

Speaking about the visit, one student said: “The China Global Television Network was different from the other places we had visited. As a journalism student, it was beneficial to be given an insight into how China deliver the news to a mass audience. It was interesting to discover how they chose news stories to cover.”

Students also took part in a Journalism and Communication Academic Workshop, organised by BFSU, which offers opportunities for students studying towards a Journalism and Communication degree to present their work and communicate with experts about their experience as well as obstacles in academic writing. Victory Fasaye, a first-year student on the Television Production BA Honours course had the chance to present her best assignment at the BFSU Graduate Forum, alongside students from Renmin University of China, Communication University of China and Beijing Foreign Studies University.

One student said: “The [BFSU] teachers seemed passionate about both their field of study and their students. This respect seemed to emanate back from the students, who had terrific respect for their professors.”

At the end of the trip students spent a whole day conquering the Great Wall of China, wrapping up the experience with traditional food from Beijing - Beijing Yangfang Mutton Hotpot.

Recalling the visit, Visnja Marjanovic, Journalism BA Honours student, said: “What an experience! You often hear ‘amazing’, ‘breathtaking’ and ‘magnificent’, but somehow the word ‘steep’ is never mentioned when describing the Great Wall of China! The initial feeling of reaching the top of a part of the wall comes once in a lifetime and the view is unforgettable. Every step is worth it… even if you can’t feel your legs for a while!”

Other visits during the trip included the Forbidden City, Imperial College, the Confucius Temple and Lama Temple.