Professor John Owens of the Department of Politics and International Relations gave a talk on the US congressional committee system to over 40 Commonwealth MPs and clerks at the Commonwealth Parliamentary Association’s 60th Westminster Seminar on Parliamentary Practice and Procedure held in the UK Parliament at Westminster on 16 March 2011. 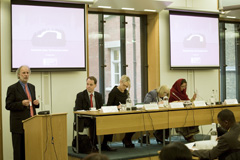 First held in 1952, the Westminster Seminar Series provides an intensive period of study for newly elected MPs and early-career clerks from across the Commonwealth as part of the Commonwealth Parliamentary Association’s programme for strengthening parliamentary democracy and good democratic practice.

The 2011 series focused on the structure, functions and influence of parliamentary/legislative committees and the promotion of strong, effective, and transparent committees. In his talk, Professor Owens focused on the US congressional system, which is usually seen as strong and autonomous. He emphasised, however, that increasingly over recent decades when legislation is considered that is important either to the majority party or the president, party government replaces committee government in the US Congress. Other contributions were given by MPs and staff from the British House of Commons, the South African Parliament and the Pakistan Majlis-e-Shoora, and other academic specialists.