Sculptures by Mellissa Fisher, who studied Illustration and Visual Communication BA Honours, are currently on display at The Eden Project. 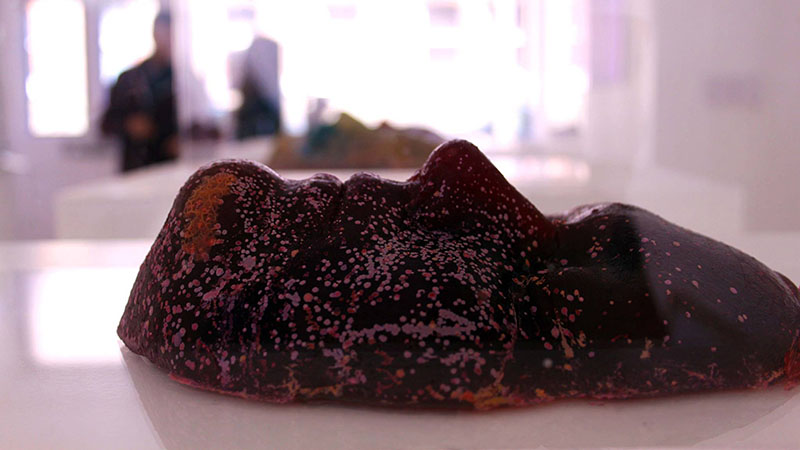 In order to create the bacterial sculptures, Mellissa made moulds of her own face and cast these moulds in Agar, a surface which encourages bacterial growth. She then took swabs from her face in order to collect the bacteria and applied this bacteria to the Agar faces. The bacteria survives for up to a year, which means that the sculptures are constantly changing.

The inspiration for the work came from a module on the Illustration and Visual Communication BA Honours course called ‘Broad Vision’. This module allowed Mellissa to discover the potentials of mixing art and life sciences.

A lecturer on the Illustration and Visual Communication BA Honours course is Emma Dodson. Speaking about Mellissa’s time at the University of Westminster, Emma said: “Not only did she find a subject area she was passionate about exploring with others, she became a confident artist, an articulate communicator and an influential facilitator, encouraging and working alongside students on subsequent similar projects.

“Before I knew it she was happily engaging on various public stages, presenting her work at the Subtle Technologies festival and other fairly high profile venues full of influential people interested to hear about how she worked with scientists to develop her 'living sculpture' work.

“I have taught for many years and never quite seen a student burst into bloom as brilliantly as Mel. She is a shining testament to the power of conversation between art and science.”

The work is being exhibited at The Eden Project as part of an exhibition called ‘Invisible You’.

Find out more about Illustration and Visual Communication BA Honours.