University of Westminster graduate Oliver Frost has not only once again broken the world record for solving the 4x4x4 Rubik’s Cube blindfolded but also added the 5x5x5 blindfolded world record to the list of his remarkable achievements. 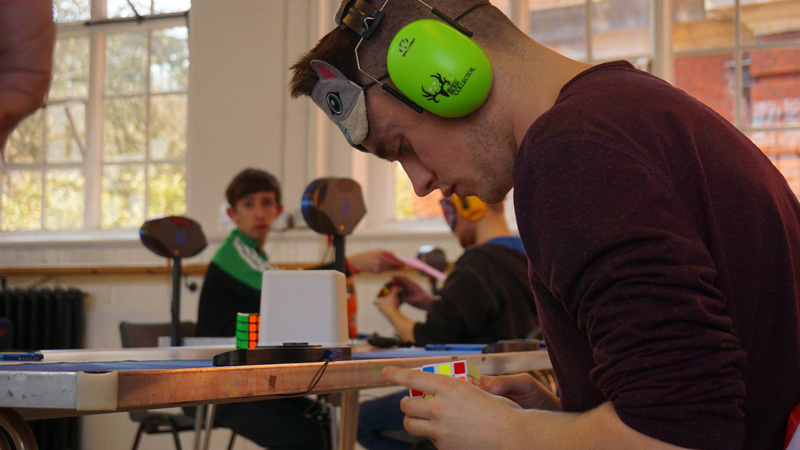 The former Cognitive Neuroscience BSc Honours student set the new blindfolded 4x4x4 Rubik’s Cube record at 2 minutes 02.75 seconds at the Irish Championships in Dublin, breaking his own world record of 2 minutes 18.65 seconds. At a separate event entitled Welcome Back to Guildford 2015, he impressed the crowds by smashing the 5x5x5 blindfolded record with an impressive time of 5 minutes and 35.84 seconds.

Oliver had trained every day during his first and second years of University to perfect his memory system and be able to remember more information in a shorter space of time. “I practised to the point where I was consistently getting times that were faster than the world record at the time and all I had to do was wait for an official competition to come along and to not lose my nerve,” he said. “Since then, my final year exams and finding a new job took priority so I no longer practise anywhere near as much as I used to, perhaps half an hour a week, if I have the energy. But because I have been using the same memory systems for a number of things for a few years now, it does not take long to get back to my old form.”

Oliver’s remarkable talent has also paved the way to success in his career. He has just started a new job as a data engineer with a London-based data science and analytics company called Consolidata, focusing on analytics and Business Intelligence (BI).

Speaking of how his records were partly the reason for securing his job, the former Faculty of Science and Technology student said: “The key to providing new and interesting insights for companies in order to help them retain customers and find new ones is to apply a degree of problem-solving and out-of-the-box thinking when approaching a business problem. This might consist of comparing two data sets which they did not think to analyse together before, to spot anomalies or to do predictive analyses based on the current data.”

Oliver’s 5x5x5 blindfolded world record has been beaten by a Russian speed cuber since, but he says he has further plans with the Cube. “I believe I have yet to reach my full potential in an official competition, and until that day comes then I will always fight to keep my records.”