Today’s University of Westminster BA show marks the first time that an undergraduate course has been invited to show on the official London Fashion Week schedule. 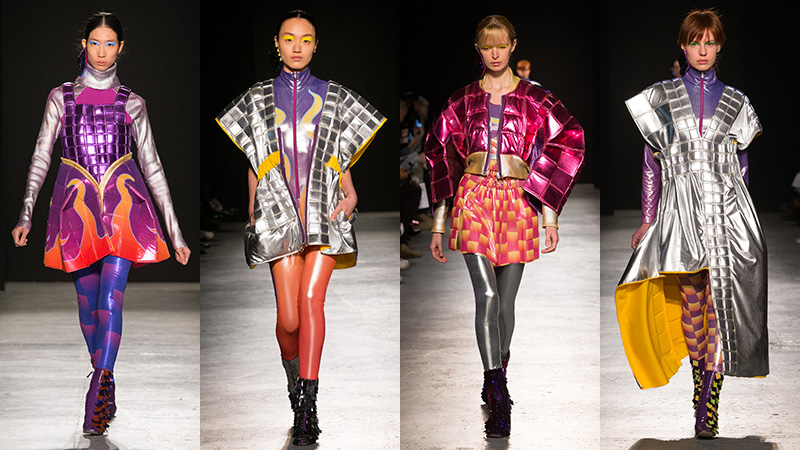 Eleven undergraduate students showed their collections on the opening day of London Fashion Week, each showing six outfits. Course Director, Andrew Groves is leading a radical rethink of how fashion education is delivered and has restructured the Westminster course to align with the international fashion calendar.

Groves said “I have long believed that fashion education needs to provide our students with the most realistic and industry-ready educational experience. By showing their collections in February rather than June, it enables our accomplished final year students to become truly part of the industry. This bold development also allows us to build on our world-class internship programme: after the second year of the BA Fashion Design course, students work for two seasons with leading international fashion houses and designers, allowing them to experience where they might fit in this diverse and exciting industry.”

In running order, the students who shows are: Megan Williams’ whose collection was inspired by the book Spacesuits: The Smithsonian National Air and Space Museum Collection; Suzi Lee’s distinctive collection is inspired by the last remaining Haenyeo Divers of Jeju Island on the South Korean peninsula; Dillan Chipchase was inspired by William Burroughs' Wild Boys and the performance art group Mutoid Waste Company. Chipchase’s menswear collection is set in a dystopian world following Armageddon.

Savanah Avery produced the vibrant collection “Motherwomb” which depicts our earth in a distant future as desiccated desert land. Joshua Crabtree drew inspiration from the Arte Povera movement. Industrial tarpaulin, wool and rubberised cotton, are juxtaposed with lightweight silk taffeta, nylon and jersey; Lauren Audrey celebrated the high glamour of the '00’s and the empowerment of women with her collection is a riot of clashing tones, rich textures, bright embellishment and brazen hemlines.

As a non-binary designer William Dill-Russell explores the language of clothing and gender identity. Influenced by Derek Jarman, Joel Peter Witkin, and filmmaker Jack Smith, the collection references similarities between historical menswear and womenswear; Holly Priestley’s debut collection is inspired by the dramatic social change in the North of England during the mid-70s and 80s. The escape valve of Northern Soul is also a major influence; vivid colours and retro prints feature throughout, derived from pub interiors and domestic homes; Catriona Wilson’s highly personal statement reflects her journey through the consuming nature of grief and the ever-fading imprint of the person lost. Catriona has re-created and delicately distorted pieces from her late mother’s wardrobe to create a collection imbued with the emotions of loss and mourning.

Manon Planche was inspired by drag racing cars and their bold and eclectic drivers. Her collection celebrates the sport’s daring and playful spirit; Paolo Carzana’s collection ‘The Boy You Stole’ is a personal protest against the abuse of power. Working with military references and traditional outerwear, a subversion of menswear codes is translated into enormous shapes and otherworldly extensions to the body.

Find out more about studying Fashion at Westminster.