Two academics from the School of Architecture and the Built Environment, Dr S E Moossavi Nejad and Dr Masi Farjadmand, have been working as dynamic and vibration consultants to The Structures Group (TGS) in the development and construction of the London 2012 Olympic equestrian deck at Greenwich Park. 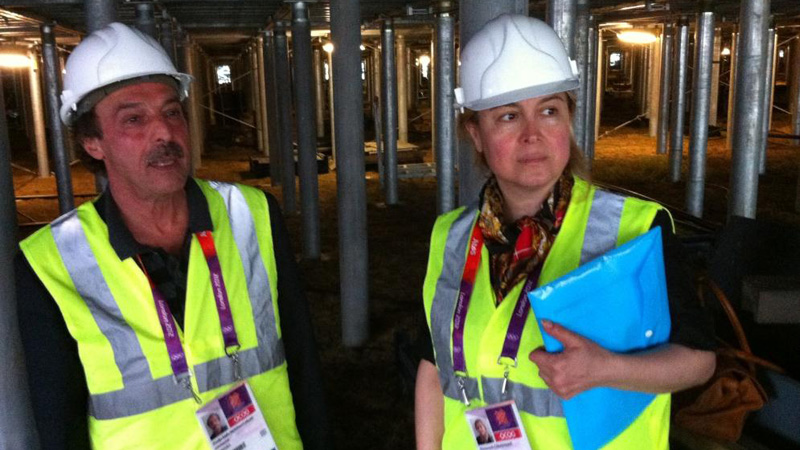 They carried out dynamic testing and analyses of the equestrian event deck to ensure a dynamically safe event deck at Greenwich. Their work assured the London Organising Committee of the Olympic and Paralympic Games (LOCOG) as well as the FEI (Fédération Equestre Internationale) that the vibration of the deck and its interaction with the equestrian activities were at an acceptable level and did not interfere with the performance of the horses.

The work was carried out over a period of three years from the initial inception of the raised deck by TSG in 2010. It continued with testing of the trial deck in Greenwich Park in June 2011, and testing of the final event deck in July 2012. They also performed live monitoring of dynamic behaviour of the deck during the Olympic event in August 2012.

Dr S E Moossavi Nejad has worked for Westminster for over three decades, and in July last year became Emeritus Fellow of the University for his services in large structures and structural dynamics. He has undertaken dynamic analysis and testing of many bridges and stadia in the past years and also co-authored a book on Structural Dynamics which was published last November. Due to his experience, he was asked to look at the dynamic and vibration of the Olympic 2012 equestrian deck in Greenwich Park, and worked on this with his colleague Dr Masi Farjadmand who has a PhD in concrete structures and is an active researcher. Her current research is based on concrete as a material, and she has published several papers on Fibre Reinforced Concrete. Her knowledge of load calculation for buildings according to both BS and Eurocode, and in particular dynamic loading, provided a valuable contribution to the work.