The conference ‘Belt and Road Initiative: New insights from the perspective of transnational Chinese migration’ discussed the role played by Chinese diasporic communities in the making of ‘connected societies’. 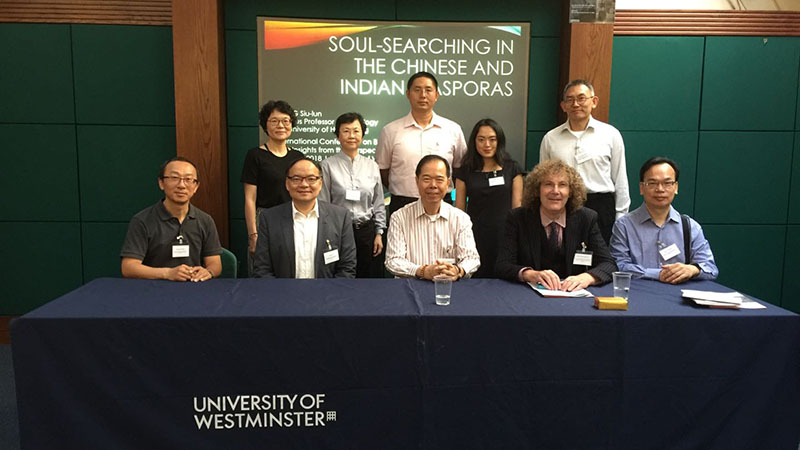 Held at the Boardroom in the Regent Campus on Friday 3 August, the conference was organised by Dr Cangbai Wang from Westminster’s Contemporary China Centre in collaboration with Dr Hao Gao from Tsinghua University and Dr Victor Zheng from the Chinese University of Hong Kong. It shed new light on China’s global rise and its impacts on the relationship between China and the UK.

The event brought together scholars from China, Singapore, Hong Kong and Taiwan as well as China specialists from the University of Cambridge and the University of Westminster to discuss a range of issues in relation to the concept and practices of the Belt and Road Initiative (BRI) proposed by Chinese President Xi Jinping.

The Belt and Road Initiative means to revive the legacy of the ancient Silk Road, on land and across the sea. It is the fundamental core to boost cultural exchanges and economic collaboration between Asia and Europe.

The aim of the conference was to contribute to the debate the BRI has opened. It focused on the notion of ‘diasporic heritage’ in a new global discourse of development, referring to tangible and intangible practices related to transnational migration through the case studies of the Overseas Chinese in Asia.

The conference highlighted the roles played by transnational migrants in the making of ‘connected societies’ in Asia, the extent to which the BRI discourse is built upon a shared maritime heritage, as well as implications of the BRI to Southeast Asia and the world.

Professor Peter Catterall, from the School of Humanities, welcomed the speakers and audience on behalf of the University and emeritus Professor Wong Siu-Lun from the University of Hong Kong delivered a keynote speech on the topic.

Organiser Dr Cangbai Wang said: “It is an honour and a great pleasure to host this important conference at the University of Westminster. It is a testimony of the success of the Contemporary China Centre in the area of China studies, and paves the way for developing further research collaboration and academic exchange between our university and major universities in China and Asia.”

Learn more about the Contemporary China Centre at the University of Westminster.

Learn more about the University of Westminster global partnerships.