Senior lecturer in videojournalism Dr David Dunkley Gyimah urged a public gathering in Moscow to look to their cinema techniques for developments in news storytelling innovation. 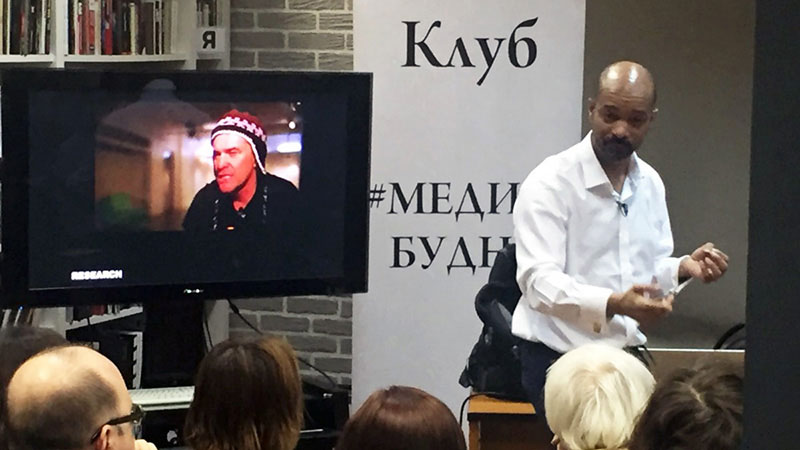 Dr Dunkley Gyimah spoke at the Nekrasov library in Moscow and two private universities, The Higher School of Economics, and Medialoft at the Moscow school of Social and Economic Sciences. He cited Dziga Vertov, Vsevolod Pudovkin and Andrei Tarkovsky, three Russian film makers whose storytelling style is transferable to videojournalism.

“That doesn’t mean the framing and average shot length has to replicate cinema, by being over twelve seconds and certainly not the fictionalisation of events,” says Dunkley Gyimah, but that news events contain an internal dynamic that can merit using different filmic styles to appeal to wider audiences.

In a number of social experiments, David showed films produced by television news and international award-winning videojournalists of the same event. Viewers reported that they were more deeply affected by the videojournalists film, which used styles and techniques taken from cinema filmmakers.

Dunkley Gyimah says that for too long we’ve been wedded to one model construct of news story telling which has been ‘fit for purpose’ since launching in the 1950s, but as evidenced with new channels like AJ+ and social media video sharing, our appetite for new aesthetics and strong immersive story styles increasingly sit outside the television news’ style that developed 70 years ago.

Dunkley Gyimah’s findings are part of a brand new course launching at the University of Westminster in September 2017, Digital and Interactive Storytelling LAB (disLAB), which investigates and produces innovative methods of media production across digital and interactive storytelling. The course will be led by Dr Sandra Gaudenzi and Dr Massimiliano Fusari who are experts in interactive documentaries and photo-based productions respectively.