On 26 May the University of Westminster joined hundreds of institutions across the country to celebrate the first Face Equality Day, a national event created to raise awareness of face equality and stand up against discrimination of people living with a facial disfigurement. 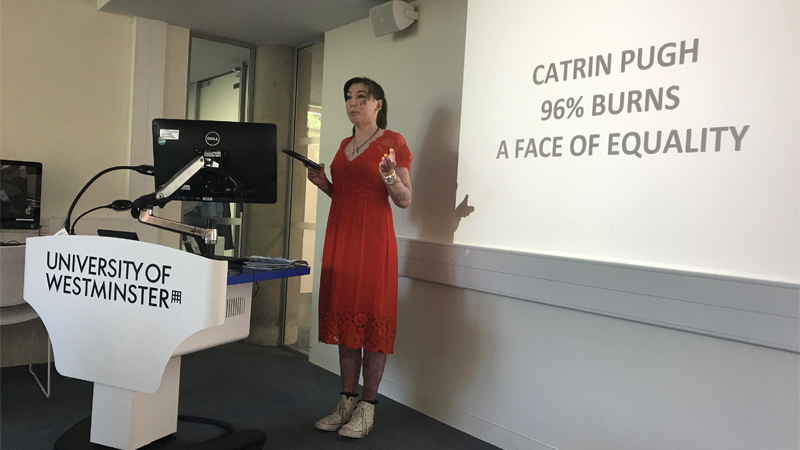 The University of Westminster supported Face Equality Day by hosting a number of events at the Harrow campus, including an exhibition by fine art photographer Linda Hansen and a workshop on media coverage of facial disfigurements.

The workshop was led by Catrin Pugh, who survived a bus accident with 96% burns across her body. Catrin is now an ambassador for the UK charity Changing Faces. She spoke about the accident and the process of recovery, explaining that setting small milestones helped her get back to normal life.

Catrin also described common media portrayals of facial disfigurements, noting that the majority of villain protagonists in cartoons are presented with marks or scars on their faces. She said: “We grew up with this idea that someone evil has something different on their face.”

Referring to the portrayal of her accident in the media, Catrin Pugh said that newspaper headlines often described the case with negative adjectives, such as horrific and horrendous, a narrative she thinks needs to change in future if we are to achieve Face Equality.

Asked about her next milestone, Catrin said that she wants to pursue a University degree in Physiology because of the difference it made for her and many others.

A photographic exhibition, Naeveus Flammeus, by fine art photographer Linda Hansen, was also on display at the Harrow Campus featuring a series of portraits of adults and children with birthmarks on their face or neck, known as port-wine stains which aims to get people to see beyond the facial disfigurement.

The exhibition and events were presented as part of the research project, Facial Disfigurement in the UK Media: From Print to Online, conducted by Dr Diana Garrisi and Dr Jacob Johanssen which aims to research how facial disfigurements are portrayed in the British press, as well as how individuals with facial disfigurements present themselves on social media.