The Institute of Electrical and Electronics Engineers (IEEE) welcomed almost a hundred members and guests at its first Christmas Lecture, hosted at the University of Westminster’s Regent Street Cinema. 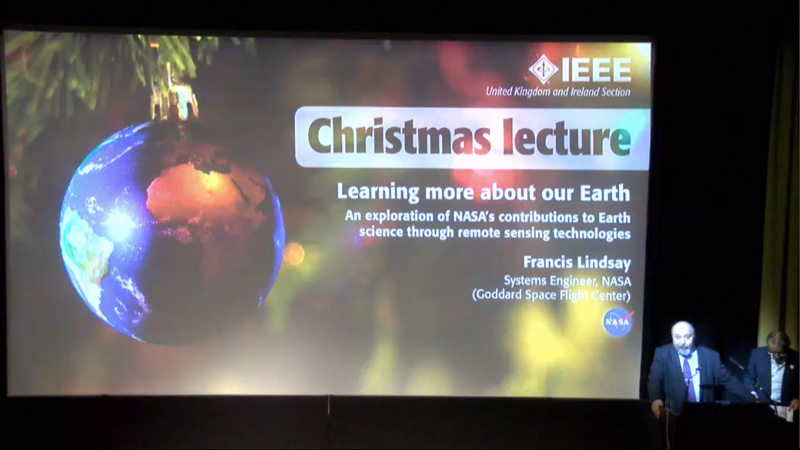 The highlight of the event was the live lecture ‘Learning More about Our Earth’, streamed directly from the Goddard Space Flight Centre and presented by Dr Francis Lindsay, who is a Systems Engineer at NASA.

Professor Izzet Kale, Head of the Engineering Department, who supported the organisation of the event, opened the lecture following on from an introduction to the IEEE UK and Ireland Section by Professor Ali Hessami. Professor Kale went on to note the historic significance of the venue by saying: “I would like to, on behalf of our acting Vice-Chancellor, Professor Graham Megson, welcome you to the University of Westminster and in particular to this historic venue, the so-called Regent Street Cinema. This institution and this building in particular has its many ‘firsts’.

“This building itself was the forerunner to the Science Museum. Furthermore, this cinema venue, which has been renovated, has been the witness of the first moving picture by the Lumière brothers. At the time in the 1860s when this was happening there were transatlantic telegraphic communications from within this building going across to the US. So, with that note in mind, that we are going to go to the US today through today’s telecommunications technologies but not from the 1860s, I will hand over to Frank and I look forward to a great lecture and event.”

Celebrated for its pioneering work in space exploration and the technological advancements that made access to space possible, NASA is now increasingly known for the agency's research and technologies that support the Earth Sciences.

The IEEE UK and Ireland Section's Christmas Lecture investigated these efforts, told mostly through the technological innovations that NASA uses to achieve a greater understanding of the Earth as a system. Enabling this science is NASA's fleet of over two dozen Earth Science spacecraft, supported by aircraft, ships and ground observations.

The launch of the three flagship satellite missions since 1999 – Terra, Aqua and Aura – and NASA's initial 'Mission to Planet Earth' made it possible to measure aspects of the environment that touch the lives of every person around the world.

Discussing the Earth Science Mission profile, Dr Francis Lindsay said: “Going all the way back, we had flown Earth missions before but now we are systematically faced upon our advisory committees and others – what type of instruments, what type of missions would be needed and that one took many years to actually put in place.”

Over the past two decades NASA’s Earth science programme has been driving the development of new missions, investing in remote sensing instruments and technologies, and creating a supporting data and information system infrastructure, OSDIS, for ingesting, processing, archiving and distributing all of NASA's Earth science data.

Click here to watch the recording of the lecture by Dr Francis Lindsay.

Learn more about the Engineering Department at the University of Westminster.