University of Westminster hosts launch of Lets Change the Record

Last Month, University of Westminster hosted the launch of Lets Change the Record, a new initiative to challenge the gender dynamics of the music industry. 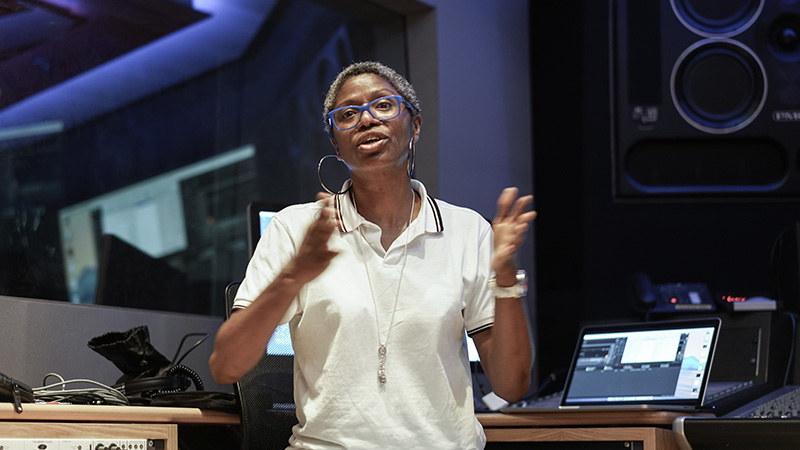 Sally Gross, Principal Lecturer in Music Business Management led two events in the University of Westminster’s School of Media Arts and Design, to launch ‘Lets Change the Record’, a new initiative conceived to directly address the critical underrepresentation of women in all aspects of the music industry.

On 19 May, Sally Gross, with Music Manager Andy Inglis and Music Business Consultant Daniel Nordgård, held a workshop which invited five experienced industry professionals to share their knowledge with 11 aspiring music business students. The workshop began with a short discussion on inequality in the music industry and proceeded with talks on subjects including music copyright, management and record labels, and publishing deals.

The workshop was followed on 21 and 22 May by the Lets Change the Record Studio Lock-In, a practical two day event focusing on music production, a huge part of the music industry which is currently 95% male dominated.

Sally was joined by students Denise Humphreys, Bettina Cassar and Mariana Botero. They were joined by a range of inspiring industry professionals including sound engineers, producers, session musicians, artists, DJs, radio producers, artist managers, and tour managers. In addition to this group of professionals, female students from Leeds College of Music, City of Westminster College, MA Music Business Management and respondents to an open Facebook advert also joined the lock in, creating a vibrant group of mixed ability, mixed experience and mixed age women working, or aspiring to work in the UK music industry.

The event was made up of a mixture of practical studio workshop sessions and guest lectures on different aspects of the industry, towards the end of the lock in participants even began to co-write and record a track.

Amanda Mayo, a current student at Goldsmiths University said: “Let's Change the Record was one of the most inspiring music workshops I've attended.

“Hearing the stories and advice from the speakers and more experienced participants gave me a lot of clarity and direction in how I want to move forward in my music career. It was great to meet so many talented artists and "talk shop" with them as well. I left feeling like I'd made connections that will be friends, collaborators, and a general network of support for many years to come.”

All of the guest speakers were openly excited to spend time with women in the studio and built up a positive energy around their potential and the possibility of a change for women in the music business. The session feedback indicated that a future division in ability could help the creative processes and acknowledged the issues surrounding the gender separatist approach. Ultimately the Studio Lock-in inspired a taste for learning and creating as well as hope in for the future of women in music.