The episode, which is the second match of the series, will feature a team from the University of Westminster who will compete against University of East Anglia (UEA). The final line-up of alumni will be comedian and author Danny Wallace as Team Captain, neuroscientist Sophie Scott, photographer Stuart Roy Clarke and architect Torsten Schmiedeknecht. 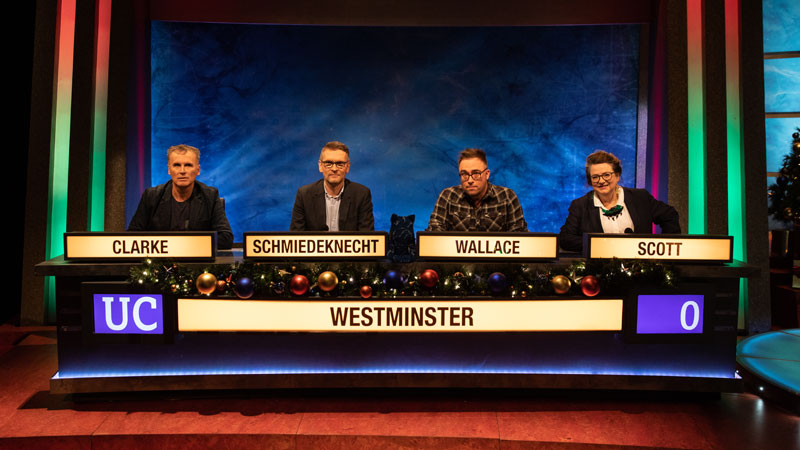 The team will face a series of difficult questions from presenter Jeremy Paxman, as they play against UEA alumni, including BBC weather presenter Darren Bett and Radio 4 newsreader Zeb Soanes.

Speaking about representing the University of Westminster on the show, Danny Wallace said: “It would be unthinkable to let Westminster down, but University Challenge is very hard to revise for. It literally means learning everything in the world. We did not do that but instead did our best to represent the University.."

Sophie Scott commented: “I was extremely nervous beforehand as I was worried about achieving a negative score. On the day itself, it was stressful but also really enjoyable, and I think we were all equally as nervous!”

Also sharing his thoughts, Stuart Roy Clarke said: “Viewers tuning in on Christmas Day, and there is no better day, will see us up against Anglia and cheer us on not caring about the future, not knowing what it will behold. Just living for that day.”

Finally, Torsten Schmiedeknecht said: “I had some truly memorable and life changing experiences at the Polytechnic of Central London (such as meeting my wife) and formed many lifelong friendships. It was good to see and feel a genuine Westminster/PCL spirit in our fabulous team and it was great fun to be on the show.”

University Challenge will air at 6:05pm on Tuesday 25 December and will be available on BBC iPlayer shortly after broadcast.