The University of Westminster (formerly the Royal Polytechnic) has a history entwined with that of the Olympics, as illustrated in our Fact of the Day, below. 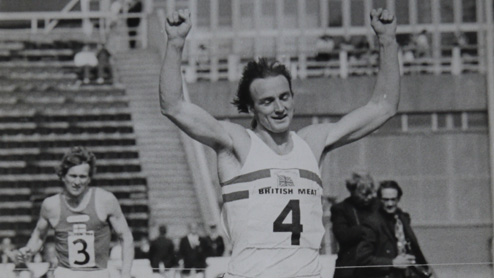 Did you know that Polytechnic Harrier Alan Pascoe was Vice Chairman of the successful British bid to bring the Olympics back to London this year?

Alan Pascoe is among the best known competitors for the Polytechnic Harriers in the post-war years. Pascoe won nine medals in the Commonwealth Games, the European Championships and the Olympics, an impressive achievement that merited his name being inscribed four times, from 1970 to 1974, on the marble memorial in the Regent Street building at the University of Westminster. Fittingly, as an amateur Pasco undertook teaching to support himself.

Did you know that the University of Westminster is involved in this year’s Olympics?

Professor Geoff Petts, Vice-Chancellor of University of Westminster, is also the Chair of Podium, the Further and Higher Education Unit for the 2012 Games. He says: ‘Since 2007, Podium has been supporting the UK’s Higher Education sector in engaging with the opportunities created by London 2012.’

‘Our universities are hosting pre Games training camps for competing nations from all over the world, helping to recruit a Games-time workforce of more than 170,000 people, and leading research related to London 2012 and its legacy. Universities are also delivering a diverse range of 2012-inspired programmes to engage people from all walks of life across the fields of art, culture, education, media and sport.’

Did you know that the Polytechnic has had competitors in every Olympic Games up to 1976 and has won 40 medals? 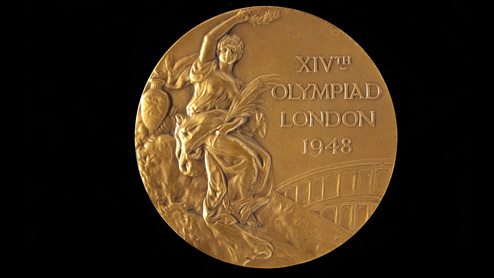 Below is a list of some of the medals awarded to Polytechnic Olympians at previous Olympic Games.

Did you know that the Polytechnic invited Olympic competitors to practise at their facilities in 1908 and in 1948? 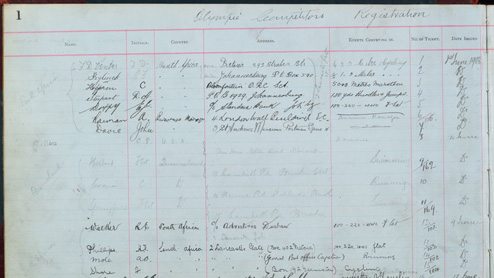 In 1908, the Polytechnic invited all Olympic competitors to become honorary members and practise in its facilities. The University still has the book with the signatures of the 300 competitors that accepted the invitation.

In 1948, the preliminary rounds of the Olympic Hockey Championships were played at The Quintin Hogg Memorial Sports Ground in Chiswick. Also, several Club members officiated at the Games. Horace Mansbergh, Honorary Secretary of the Polytechnic’s Boxing Club, for example, was in charge of the Olympic Boxing Championships.

Did you know it was the Polytechnic Harriers who added 1 mile 385 yards to the Marathon distance, to establish the standard distance of 26 miles and 385 yards in 1908? 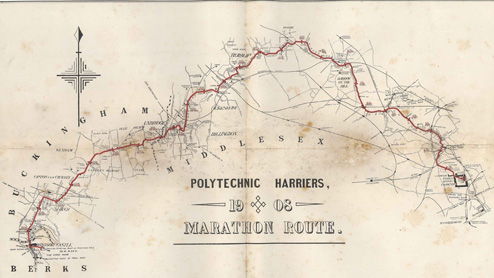 In 1908, the Polytechnic Harriers organised a trial race, with the Polytechnic cycling club as marshalls. The same route was then used that year for the Olympic race. The distance from the start of the Marathon to the finish at the stadium was changed from the original distance of 25 miles to 26 miles 385 yards, so the marathon could start at Windsor Castle and finish in the front of the Royal Box. The Polytechnic Marathon ran every year thereafter until 1996, and was Europe’s oldest regular marathon.

Did you know that the opening and closing ceremonies of the 1908 Olympic Games were organised by Robert Mitchell, Director of Education at the Polytechnic? 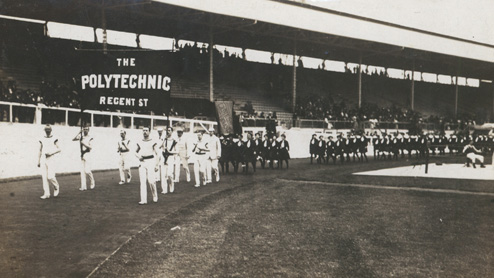 The 1908 Olympics were originally planned to take place in Naples, Italy, but with the eruption of Mount Vesuvius in 1906, the Olympics were moved to London and held in the White City Stadium, which was built for the occasion.

Robert Mitchell, Director of Education at the Polytechnic organised the opening and closing ceremonies. Three weeks before the Games began, King Edward VII, Queen Alexandra and President Fallières of France visited the White City Stadium to attend a series of events staged by the Polytechnic, including a parade of athletes and a gymnastic display. These events were commemorated in a series of postcards produced to mark the occasion.

All images are copyright to the University of Westminster archive services.