The public vote for the Westminster Alumni Awards is open

The finalists for the Westminster Alumni Awards have been announced and the public vote is now open. 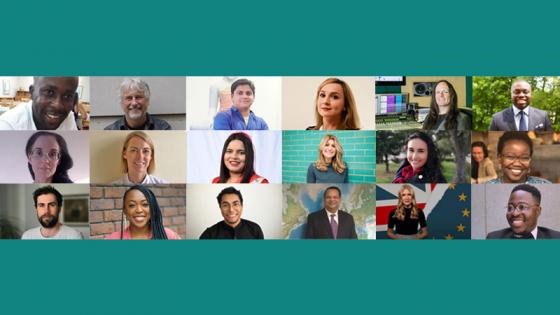 There are six categories for alumni to apply to or be nominated in by students, staff, other alumni, or members of the public.

The first category is Contribution to the Creative Industries Award, which recognises a graduate who has excelled within the realm of arts and culture. The finalists for this award include Joshua Baker, a respected specialist in conflict reporting and trusted risk planner, who graduated from the Contemporary Media Practice BA Honours course in 2012. The second finalist is Andy Brook, who graduated from the Audio Production MA in 2007 and has produced, engineered and toured with many large established artists and has built his own studio called The Brook. The third finalist is Amit Desai, a 2005 graduate of the Computer Animation MSc course, who is currently working as a VFX Pipeline Supervisor for one of the world’s leading digital visual special effects providers, DNEG.

The second award is the Entrepreneurial Award, for a graduate who displays an entrepreneurial spirit in their endeavours. The finalists are Lettija Lee, a 2006 Law LLB graduate, who created Peco Poncho, a start-up creating 100 per cent biodegradable alternatives to plastic ponchos. Charley Lester, who graduated from the Broadcast Journalism MA in 2008, is the second finalist and the co-founder and CMO of Lumen, the dating app for over 50s, which has received over £10.5 million in funding over two rounds. Mahesh Ramachandran, a 1999 graduate of the MBA, is the third finalist and a successful serial and social entrepreneur turned investor who is the founder of CEO of Commonwealth Inclusive Growth Servies Ltd, which operates in over 30,000 locations across 27 states in India.

The Lifetime Achievement Award is the third category, which recognises a graduate for their ongoing and significant contribution over a number of years. The finalists of the Lifetime Achievement Award include Iruthisham Adam, a 2001 Diplomatic Studies MA graduate, who in 2010 was appointed the first ever female ambassador of Maldives to the United Nations and in 2013 was elected the Vice President of the Human Rights Council (HRC). Susan Darker-Smith, a 2000 Contemporary Business & Psychology BA graduate, is the second finalist and is one of the founding members of the Trauma Response Network UK (TRN) and the Clinical Director of the Child Trauma Therapy Centre, where she trains doctors, psychiatrists and psychologists in how to deliver psychological interventions for traumatised children and adults. The third finalist is Professor Christopher Evans, who graduated from the Science BSc course in 1976, and now works at the University of California Los Angeles (UCLA) and holds the Stefan Hatos Chair for Neuropharmacology.

The Outstanding Achievement Award is the fourth category, which recognises a graduate who has had notable personal or professional success. One of the finalists in this category is Kow Essuman, a 2007 graduate of the Law LLB course, who was appointed by the President of Ghana to the governing board of the State Interests and Governance Authority and the Minerals Income Investment Fund in 2019. Dr Sandra Loaiza, a 2002 graduate of the Biomedical Sciences MSc course, is the second finalist, who is currently working on the development of pioneering CAR-T cancer therapy that involves reprogramming the patient’s own immune system cells which are then used to target their cancer. The third finalist is Brikena Muharremi, who also graduated from the Law LLB course in 2002, and is the founder and chair of the British-Albanian Lawyers Asssociation (BALA) and the first recipient of the newly created ‘Ambassador of the Nation’ Award from the Albanian Government.

The Recent Graduate Award is the fifth category, awarded to a recent graduate who has achieved something extraordinary within just three years of leaving Westminster. The finalists for the Recent Graduate Award are Beatriz Buarque, an alumna of the International Relations and Security MA in 2018, who has developed her NGO, which has inspired thousands of people to start using social media for peace. The second finalist Alina Isachenka, who graduated from the Journalism BA Honours course in 2017, is now a full-time journalist at the BBC, fronting a weekly YouTube current-affairs programme with more than one million views in just three programmes. The third finalist is Ethel Tambudzai, an alumna of the International Relations and Development BA Honours course who graduated in 2018, and is the co-founder of Sonaar, a platform connecting black communities around the world through arts, culture and heritage that was nominated as one of Google For Start-up’s 2019 start-ups to watch.

The sixth and final award is the Social Impact Award, which recognises a graduate who has made a positive contribution to the lives of others. Finalists in this category are Edmilson Angelo, a 2016 graduate of the Politics and International Relations BA Honours, who is the founder and director of Change 1’s Life CIO, a UK-registered charity that aims to assist people in need across sub-Saharan Africa who are victims of poverty. Joshua Imuere, who graduated from the Computing BSc course in 2002, is the second finalist who leads Art Against Knives, a North London-based youth charity that uses creativity to support young people at risk of exploitation living in difficult environments. The third finalist is John Bert Macato, a 2015 alumnus of the International Development Management MSc, who joined the International Committee of the Red Cross (ICRC) and has been doing his part in protecting civilians affected by armed conflict, where he manages hospital projects of the ICRC in these settings.

Click here to cast your vote on the Engage platform.