Super Mario Kart Tournament, inviting students to play games and contribute to a good cause at the same time, was organised in collaboration between the Marrow and the Games & Creative student societies. 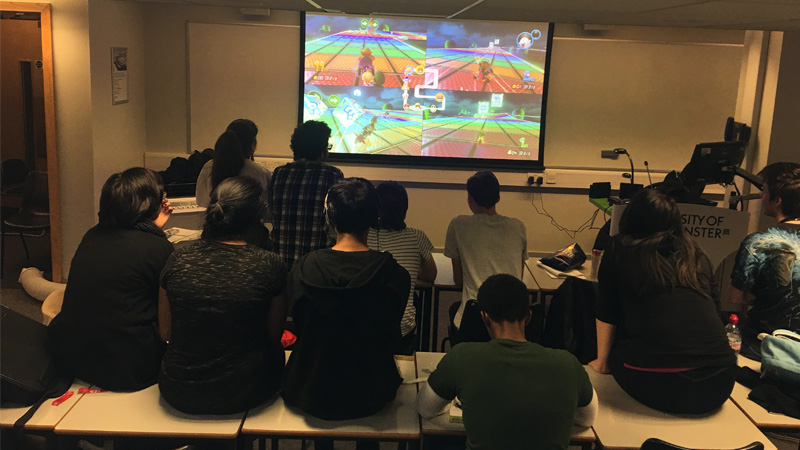 Not only did students compete in the Super Mario Kart Tournament but they supported a great cause by signing the donor register and giving swab samples for the Anthony Nolan charity as well as contributing with donations.

The Marrow Society is the University of Westminster’s student-led branch of Anthony Nolan, which runs clinics to sign people onto the stem cell register via swab samples and help people living with blood cancer. Other fundraising events the society has organised this year are Marroween and Swabmas and it has partnered up with other societies and sport-teams as well as other Marrows in London to help raise awareness and funds for the charity.

The winner of the Super Mario Kart Tournament was Amir Khan, who is an active member of the Games & Creative Society and has previously taken part in similar events. The Games & Creative Society is a group, made up of student gamers which offers wide range of activities for its members, including board games, card games, video games and many others. It also aim to provide homework help in relation to games development. The society organises its own game-jams, hackathons and hosts game livestreams to raise money for charities.

Jacquelina Watson, President of the Games & Creative Society, said: “It is important for students to realise that they are in an influential position and they really have the power to rally together and make raising money not only beneficial but fun. Anyone can raise money for a cause by just doing the things they enjoy.”

On 15 December the Games & Creative Society organised a Christmas party jointly with the Marrow Society as well as the LGBT, Choral, Salsa and Vogue societies and will be donating all gathered contributions to the Marrow Society.

Learn more about the Department of Computer Science within the University of Westminster.