Dr Celia Jenkins and Dr Umit Cetin of the Department of Social and Historical Studies have been awarded the British Education Research Association (BERA) Prize for Joint Collaboration between Universities and Schools. 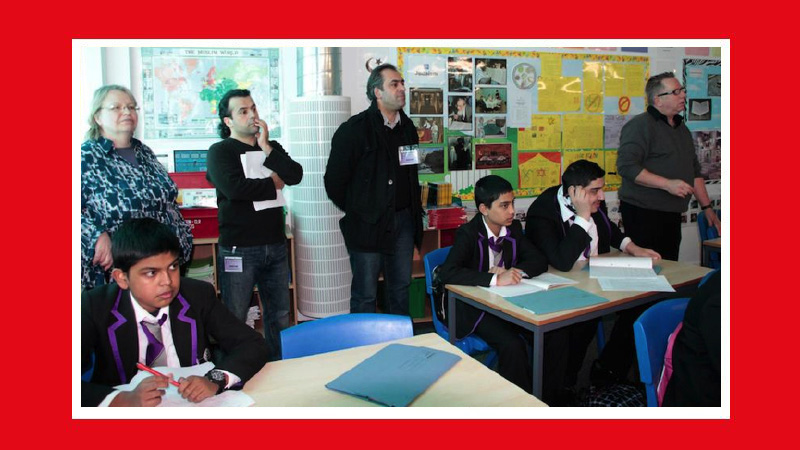 The Alevi Religion and Identity Project is a unique collaborative venture between the University of Westminster, London Alevi Centre and Highbury Grove Secondary School.

Alevism is practiced by over 20 million followers in Turkey. As 20% of the Alevi population is ethnically Kurdish, they represent a ‘twice minority’ due to their ethnic and religious characteristics. Approximately 150,000 Alevi Kurds are now resident in London having come to the UK as refugees since the mid-1980s.

The Alevi Religion and Identity Project began in 2010 in response to a rising tide of suicides among second generation Alevi young men. Dr Jenkins and Dr Cetin were invited by the London Alevi Community Centre to help tackle the negative identities in their youth. The young people described a sense of isolation and disaffection, particularly at school, where no one knew or understood their religion. They wanted schools to know and teach about the Alevi religion, which sparked off this collaborative project.

The Westminster academics worked with the Prince of Wales primary school, Enfield, to design and deliver highly successful units on Alevism at Key Stages 1 and 2. These units were launched in 2011 and the school became the first in the world to teach Alevism as part of the core religious education (RE) curriculum.  Alevi pupils now feel better integrated in the school with a positive impact on their self-confidence, achievement and behaviour.  Since 2012, the University of Westminster has worked with Highbury Grove Secondary School, with the Alevi pupils fully involved in the planning and delivery of the Key Stage 3 unit. Alevism is now officially integrated into the RE curriculum giving the Alevi pupils a positive sense of identity and a feeling of belonging in the school.

Dr Jenkins and Dr Cetin together with the schools and Alevi Centre are now producing a resource pack for use by other schools with a significant population of Alevi families and the project has received critical acclaim within the Alevi community in the UK and in Turkey.  The next stage of the research will be to conduct a survey to map the presence of the Alevi community to support their case for inclusion in the 2021 Census. The £2000 BERA prize money will be used to set up an enrichment programme in the school next year called the Alevi Hidden Culture Project, researching Alevi culture and their family history in London and Turkey to produce an exhibition and documentary of their community.

The experience of the Alevi Religion and Identity Project can be applied to benefit pupils from other minority faith groups whose religion is not represented in their schools.