The Smithsonian’s Lemelson Center in association with the University of Westminster held a public forum to discuss the past and future of innovation and creativity at the University’s 309 Regent Street headquarters on 6 April 2016. 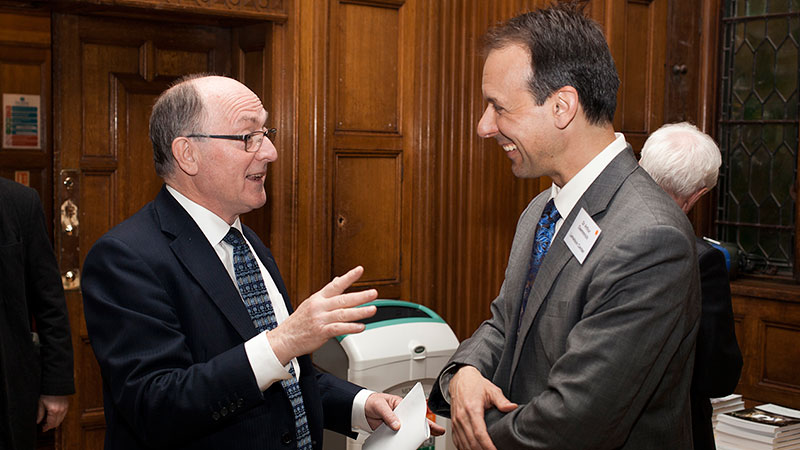 At the event entitled ‘Crossing Boundaries - Promoting Innovation and Creativity’, Dr Arthur Daemmrich, the new Director of the Lemelson Center for the Study of Invention and Innovation which is based in the National Museum of American History, gave a keynote speech about the history of innovation. Dr Daemmrich talked guests through how innovation triggers economic growth and prosperity. Innovation is in the heart of both the Lemelson Center and the University of Westminster accounting for the historic association between the two institutions.

University of Westminster Vice-Chancellor and President Professor Geoffrey Petts said: “Building on our relationship with the Smithsonian fits very well with our history and legacy and more importantly our future. This evening we started to share a discussion on how to build on our exciting heritage, to think about how we might develop that into an even more exciting future.”

,
The delegation by the James Smithson’s Memorial Plaque at Pembroke College, Oxford
,

The panel discussion was chaired by Professor Alexandra Warwick, Head of Department of English, Linguistics and Cultural Studies at Westminster, who was joined by Dr Daemmrich; Tricia Edwards, Head of Education at the Lemelson Center; Sharon Ament, Director of the Museum of London; and Stian Westlake, Executive Director of Policy and Research at Nesta. The panel discussed what innovation was, the future of innovation and how young people can be inspired to innovate. The conversation was joined by the audience including Westminster staff, students, alumni and representatives from a wide range of public and cultural bodies such as the Royal Society of Arts, the Science Museum, the National Gallery, the Royal Museums Greenwich, the Museum of London, the Royal Academy of Arts, the Imperial War Museum, the British Library and the City of London Corporation.

The discussion was followed by a reception where Westminster students, staff and alumni had the opportunity for further discussions with the high-profile guests.

The public forum was the highlight of a week-long visit of the Smithsonian delegation and Johns Hopkins colleagues to the UK organised by Alan Morrison, Coordinator of the Smithsonian-Westminster Colloquium and Principal Research Fellow at the University’s Faculty of Social Sciences and Humanities. Robert Kargon, Professor of History of Science, and Dr Sarah Chicone, Assistant Director of Museum Studies MA, both from Johns Hopkins University; Dr Peter Jakab, Chief Curator at the Smithsonian National Air and Space Museum; and Dr Arthur Molella, Director Emeritus of the Lemelson Center were all participants in the programme.

The programme, in addition to the public forum, included visits to the University’s Archives and the recently reopened historic Regent Street Cinema, a round table discussion on interdisciplinarity, and a workshop with London headteachers and museum educationalists on the Lemelson Center’s young people’s Spark!Lab invention facility.

The week concluded in a trip to Oxford to retrace the footsteps of James Smithson, the founding donor of the Smithsonian Institution, and to visit the Oxford Museum of the History of Science, the Natural History and Pitt Rivers Museums as well as the Ashmolean Museum.

Alan Morrison, Coordinator of the Smithsonian-Westminster Colloquium, said: “This programme demonstrates the commitment of both institutions to scholarly collaboration and public engagement.”

Top Image: Westminster Vice-Chancellor and President Professor Geoffrey Petts and Dr Arthur Daemmrich, Director of the Lemelson Center for the Study of Invention and Innovation, National Museum of American History