A new book from University professor of politics John Keane has attracted rave reviews – and propelled the author into the forefront of comment on the state of the nation’s body politic.Professor Keane’s new work The Life and Death of Democracy was book of the week in The Times, where writer and journalist David Aaronovitch ended his review by describing the 958-page book as a “magnificent work”. 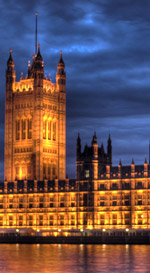 That review was followed by a comment piece in the Evening Standard, in which the Westminster professor of politics argued that the nation was facing a political crisis that demands “a fundamental shift in the way we think about democracy”.

Appearances on various BBC arts and current affairs programmes this week are also in the pipeline – as well as a BBC Radio series next year - following the publication of the book which comes 14 years after Professor Keane’s award-winning work Tom Paine: A  Political Life was published.

“I hope The Life and Death of Democracy will both inspire and shock readers,” said Professor Keane. “It’s the first grand history of democracy for well over a century and poses along the way some tough and timely questions: for instance, can we really be sure that democracy had its origins in ancient Greece?

“How did democratic ideals and institutions come to have the shape they do today? Given all the recent fanfare about democracy promotion, why are many people now gripped by the feeling that a bad moon is rising over all the world’s democracies, not only in Britain?”

More details of the book can be found at http://www.thelifeanddeathofdemocracy.org/

John Keane is a Fellow of the RSA and founder of the University’s Centre for the Study of Democracy. His other books include Global Civil Society (2004) and Vaclav Havel: A Political Tragedy in Six Acts (1999).