On 15 June Nick Clegg, MP, former Deputy Prime Minister and part of the official Stronger In campaign, addressed staff and students at the University of Westminster, presenting his views on the EU referendum and answering questions from the audience. 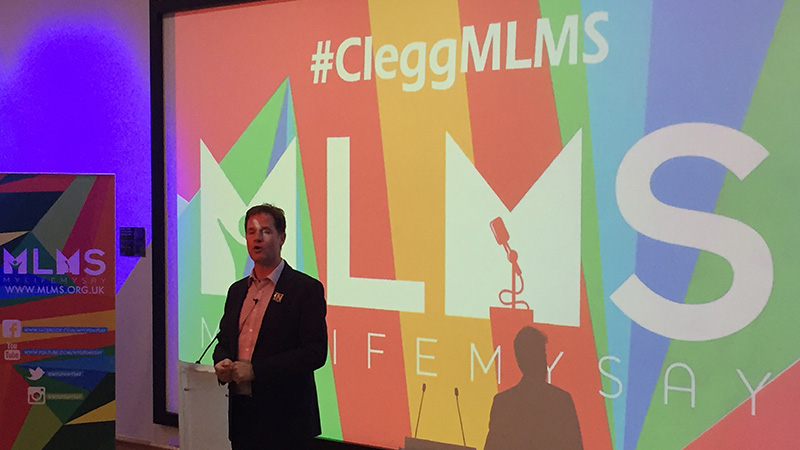 Organised by My Life My Say, a national youth led organisation promoting youth engagement in politics, the event was hosted by June Sarpong, TV presenter and chair of the Stronger In campaign, and was attended by over 300 staff, students and alumni.

Rob Macmaster, Principal Lecturer in the Department of Politics and International Relations, opened the talk by introducing event chair June Sarpong who gave a short introduction to Nick Clegg.

The ex-Deputy Prime Minister of the UK gave an impassioned speech on the history of the UK and our historical inclusiveness as a nation, presenting ‘Remain’ arguments on national security, immigration, the free market and the shared unity that comes from being within the EU.

Clegg also stressed the importance of the referendum vote to young people, explaining that this vote - unlike general elections - has more long term impact than any other referendum held in the UK since the Second World War. “Please, please get involved and vote,” he said passionately. “Unless you’re in favour of Brexit!”

He then opened the floor to questions, giving answers on the legality of the referendum, explaining that although the vote would not be legally binding, it would almost certainly be followed by parliamentary reform to change our law to meet the outcome of the referendum.

He also addressed questions on the proposed facts of the debate. “There is no one fact that you can read which will make your mind up,” he said. “The EU is complicated, some things are good and some are bad, but this vote is about deciding who we want to be as a country, do we want to be inclusive or exclusive?”

Leaving the audience with this question, June Sarpong closed the event thanking Nick Clegg and My Life, My Say for organising it. Khayer Chowdhury, University of Westminster alumnus and Director of Public Affairs at My Life My Say who organised the event, said: “Young people in Britain generally feel detached from a political system that has for too long side-lined them and their concerns. MLMS engages young citizens, the private sector, and the government in open-debate settings to break down barriers which stifle dialogue.

“We decided to host this event at the University of Westminster because, as an alumnus, I recognised the relevance of this debate to a lot of the current students at Westminster.  We look forward to working with Westminster in the future on expanding the MLMS reach and increasing political engagement in young people.”

Learn more about the Department of Politics and International Relations.