Monsoon [+ other] Airs: an innovative multidisciplinary symposium organised by the Westminster Department of Architecture

Monsoon [+ other] Airs is the first of three symposia convened by Monsoon Assemblages, a five–year research project funded by the European Research Council and led by Director of Westminster Architecture research Professor Lindsay Bremner. Each symposium is structured around a material element: Monsoon Airs, Monsoon Waters and Monsoon Grounds. 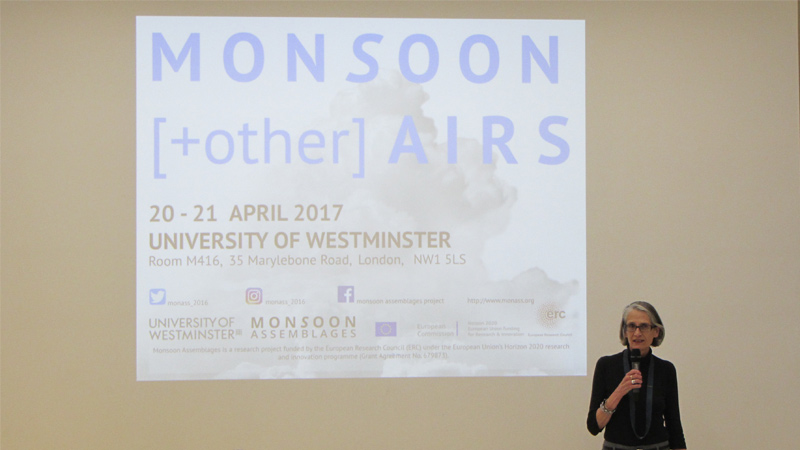 This year’s assembly asked questions of monsoon atmospheres, airscapes, media and politics. Envisaged as a multidisciplinary gathering, a diverse array of people attended including architects, anthropologists, journalists, meteorologists and designers. The event provided an opportunity for them to discuss air related matters from different perspectives.

The topic of Monsoon Airs was interpreted broadly resulting in thematic panels on air space, weather reports and air politics. The symposium began with a keynote lecture by architect Sean Lally from Weathers, a Chicago-based design office.

Presentations were accompanied by an exhibition which included contributions from members of the Westminster DS18 Master of Architecture design studio, as well as Architecture students from Chennai who participated in a recent fieldtrip organised in association with the project. The exhibition was curated by Anthony Powis, a Monsoon Assemblages doctoral researcher, with support from Tom Benson and Calvin Sin from DS18.

Attendees of the event found it to be an intellectually inspiring and stimulating experience that opened up new ways of thinking. Common threads emerged, connections were made, and important questions were raised about how air could be better represented in different types of work.

Speaking of the event Tom Benson, Master of Architecture (MArch) (RIBA pt II) student  and member of DS18 at the University of Westminster, said: “Attending the symposium was informative and fascinating. The event gave me a chance to engage and communicate with speakers and researchers outside of the field of architecture, as well as staff from other University faculties. I was lucky enough to interview the keynote speaker, Sean Lally. Meeting Sean, it was clear how passionate he is about his work and research. This experience has motivated and inspired me to become a successful architect in the future.”

Stine Simonsen Puri, a Postdoctoral Fellow from Copenhagen University, also said: “Monsoon [+ other] Airs was one of those rare moments where interdisciplinarity creates synergy and releases creative thinking. Coming from the field of anthropology, I was truly inspired by the visual and material approaches taken by other disciplines. Participating in the event made the potential relevance of my own research clearer to me by making connections with researchers from different disciplines, and to the world outside academia.”

Learn more about the panels and individual speakers at Monsoon [+ other] Airs.