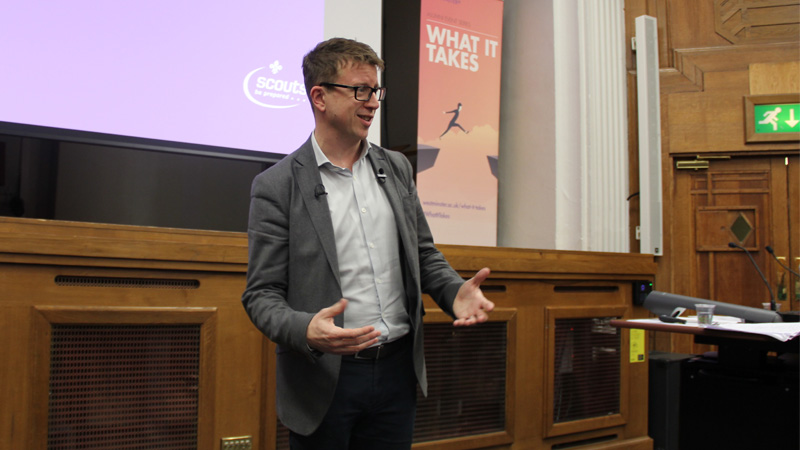 The event series ‘What it takes’ feature successful Westminster alumni speakers each month to inspire students and recent graduates and give them the opportunity to network with each other.

This month, Matt Hyde, who graduated with an MBA in 2003 and is now Chief Executive of The Scout Association, one of the biggest youth organisations in the UK, was invited to talk about his career and share his experience of becoming an effective leader.

Matt joined The Scout Association as Chief Executive in April 2013. He is also Vice-Chair of the National Council for Voluntary Organisations (NCVO) and a trustee of youth social action charity Step Up Serve. Before joining The Scouts, Matt was Chief Executive of the National Union of Students (NUS) for seven years, leading the organisation through a significant change programme. He is also a Patron of UNLOCK, a charity for people with convictions, and a Fellow of the Royal Society of the Arts.

Matt discussed his leadership journey during the event and provided practical tips for students about how to work their way to the top of a company chain. Students also had the chance to ask Matt questions and network with each other at the end of the event.

During an interview he gave to the Westminster alumni team, Matt Hyde revealed which skills for him are necessary to become an effective leader. “Be honest and open with people. Look after yourself so you can be your most effective. Learn from others but develop your own style so you can act with authenticity. Set a clear sense of what the future can look like and then spend lots of time engaging people.”

The next event, as part of the ‘What It Takes’ alumni event series, will take place on 24 January and will give students the opportunity to meet Victoria Heath, Westminster alumna and Senior Biomedical Scientist. She will be giving the lowdown on her journey to becoming an accredited Biomedical Scientist and travelling to Sierra Leone to work in a treatment centre as part of the British government response to the Ebola virus outbreak.

Find out more about the ‘What it takes’ series organised by the Westminster Alumni team.

Watch Matt Hyde’s presentation at the ‘What it takes to be an effective leader’ event.

Find out more about the next ‘What it takes’ event entitled ‘What is takes to aid in a crisis’.