In a talk at one of Westminster’s central London campuses, award-winning architect and Westminster alumna Angela Brady examined the intersection of politics and architecture, sustainable design and community engagement. 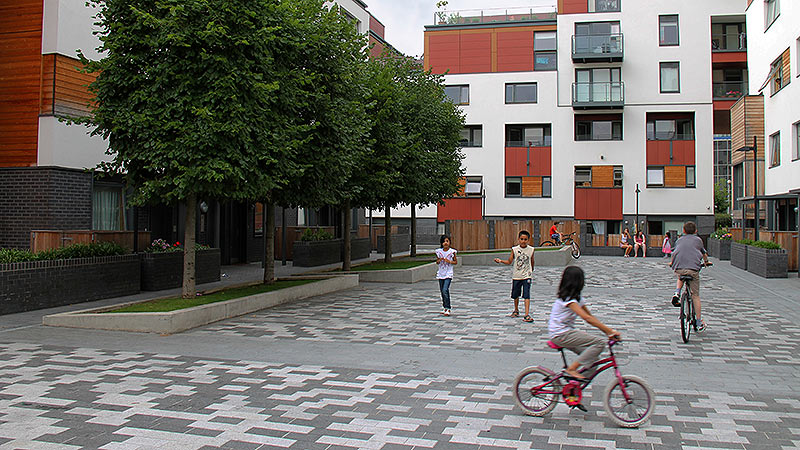 Angela graduated in 1986 and is a founder of the award-winning practice Brady Mallalieu Architects, which specialises in contemporary sustainable architecture. She is a former President of the Royal Institute of British Architects (RIBA 2011-2013) – the second woman to be elected to the post.

The talk was attended by a mix of Westminster students, academics, architects, planners, quality surveyors, and others working in property or interested in architecture and sustainability.

The topic of the lecture was introduced by Harry Charrington, Head of Department of Architecture in the University’s Faculty of Architecture and the Built Environment, who explained: “One of the things that is very important about the talk is the stress on integration – that we take charge of political initiatives through working with other people. And I think the ideas of sustainable cities and integrated design are two sides of the same coin.”

Angela kicked off the evening by underlining the importance of sharing ideas: “One thing we need to be careful of is that we don’t just talk among ourselves, or we will miss out on including the general public. If we want to make change on the importance of sustainable design in architecture and place, then we need to involve the public in what we do, otherwise they won’t know how they can help too.”

She went on to highlight the connection between politics and architecture: “Architecture and politics are interlinked. Architecture is made up of the decisions made by our politicians no matter where you live in the world. Unless we as architects know how to influence politicians, they will just do their own thing. So I always say: campaign for things that you really believe in.

“London is experiencing the housing doughnut effect like Paris, where only the rich can live in the centre, and people who cannot afford a home are pushed to the outer ring. This is having a demographic effect on London, which has one of the most diverse populations in the world. Politics is changing the architecture of London.”

She also explained how mixed housing developments including social as well as private housing, and incorporating open space, have a positive effect on the community and the way people use spaces, bringing communities together: “The idea that you have many different people from different economic backgrounds living in the same building and area without stigmatised segregation is a positive way forward for society. Good design of public space can lead to areas being more sociable and can link people with nature with safe outdoor play spaces and shared gardens and roof spaces.”

At the end of the talk, the Westminster alumna spoke out against unpaid internships, which she banned as president of RIBA, and called on others to scrap them.

Angela is an avid campaigner for sustainable design and for an equal role for women in architecture. She has won many awards over the years, including The Irish Post/AIB Bank award for personal achievement in architecture, the lifetime achievement award Women In Construction 2012, and the WISE Award for women of outstanding achievement for Leadership and Inspiration 2013. Angela is also a professional TV broadcaster and author of The British Papers incorporating current thinking on sustainable city making, launched on 31 March in RIBA bookshops.

The University of Westminster is one of the UK's leading centres for the study of Architecture and the Built Environment, inspiring more than 2,000 students at its teaching base at Marylebone, in central London.