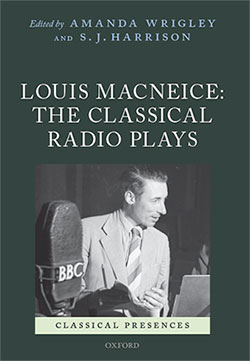 The book, published by Oxford University Press, presents eleven radio scripts written and produced by the poet and writer Louis MacNeice (1907-63) over the span of his twenty-year career at the BBC, during which he wrote and produced well over a hundred radio scripts on an impressively wide variety of subjects.

These scripts, all but one of which is published for the first time, illustrate the various ways that MacNeice re-worked one particular and recurrent source of material for radio broadcast - ancient Greek and Roman history and literature. The volume thus seeks to explore MacNeice's literary relationship with classical antiquity, including engagements with authors such as Homer, Thucydides, Aristophanes, Xenophon, Petronius, Apuleius, and Horace, in a variety of types of programmes from wartime propaganda work, which used ancient Greek history to comment on the international situation, to lighter entertainment programmes drawing on the Roman novel. MacNeice's educational background in classics, combined with his skill as a writer and his ability in exploring radio's potential for creative work, resulted in programmes which brought the ancient world imaginatively alive for a massive, popular audience at home and abroad.

Each script is prefaced by an individual introduction, written by the editors and guest contributor Gonda Van Steen, detailing the political and broadcasting contexts, the relationship of the script with classical antiquity, notes on cast and credits, and the reception of each script's radio performance among contemporary listeners. The volume opens with a general introduction by Amanda Wrigley (titled ‘Louis MacNeice, Classical Antiquity, and BBC Radio: From Wartime Propaganda to Radio Plays’) which seeks to contextualise the scripts in MacNeice's wider life and work for radio. The volume includes an appendix of extant MacNeicean scripts and recordings which is designed to encourage further studies of MacNeice’s radio oeuvre.

View further information about the book.