The study, carried out by Professor Jimmy Bell and Dr Louise Thomas, from the School of Life Sciences, found that an MRI-based measure could be used as a potential biomarker for liver health. 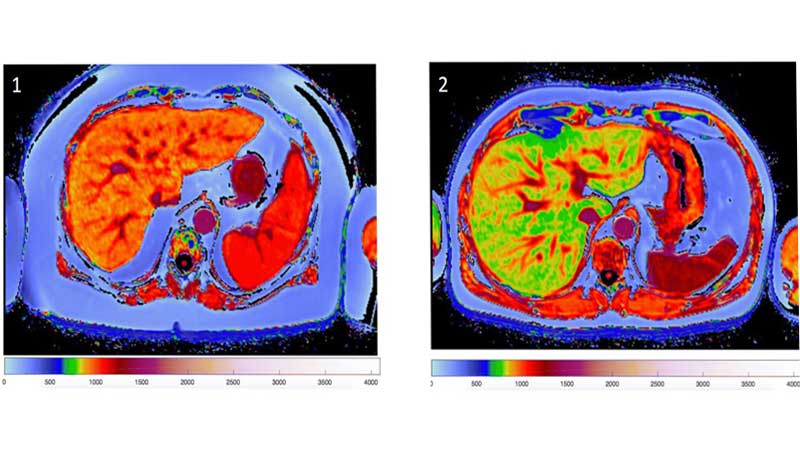 The large-population study, in partnership with Perspectum Diagnostics and Massachusetts General Hospital, revealed the utility of LiverMultiScan™, a Perspectum Diagnostics’ technology. Its corrected T1 values, (a tissue characteristic determined by magnetic resonance imaging) were found to be potential biomarkers for liver health in metabolic diseases, without the need for an invasive liver biopsy.

The research was carried out with 2,800 subjects from the UK BioBank MRI imaging study, the world’s largest study of its kind ever undertaken. It revealed a tight distribution of corrected T1 values in a sub-population at low risk (37 per cent of participants) for Non-Alcoholic Fatty Liver Disease (NAFLD), which can act as a baseline comparator in the diagnosis of patients with suspected NAFLD and Non-Alcoholic Steatohepatitis (NASH).

It has become increasingly critical to identify individuals who are at risk of NAFLD, build-up of fat in the liver, and NASH for an early diagnosis. Amongst the many benefits of measuring corrected T1 in the liver is that it may be able to distinguish between NAFLD and NASH.

The KTP project had a value of £207,496 and lasted 36 months. It sought to develop new algorithms to create the vital bioinformatics and statistical platform for a novel MRI-based method to determine fat, iron, inflammation or fibrosis in the liver.

This research displays the cT1 potential as a reference range of values, in a low-risk population, that can become a biomarker for future studies. This methodology could in future replace liver-biopsy, which would open up the ability to non-invasively monitor the liver in the general population, this would be of huge benefit to medicine and clinical research.

Talking about the research, Dr Louise Thomas said:” Although we have had the technology to non-invasively measure liver fat for many years, being able to differentiate between different stages of liver disease without taking a tissue biopsy has always been a huge challenge. The potential value of cT1 for distinguishing between straightforward fat accumulation in the liver ‘NAFLD’ and the more serious NASH, has huge implications for early disease diagnosis and the potential for drug development.

“Giving the increasing incidence of both NAFLD and NASH in the UK population it is tremendously exciting to be part of this research which may benefit so many people in the long term.”

Professor Bell and Dr Thomas have a long-standing record of studying the liver, with a contribution to a major research on liver fat published in the scientific journal Clinical Science and covered by multiple media outlets in 2017.

Find out more about Life Sciences at Westminster.