Mark Thompson ended the two day conference on Journalism in Crisis promising to share the BBC’s audiovisual assets with other media outlets. 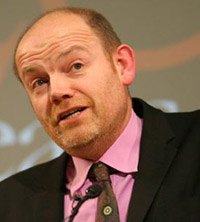 Jeremy Paxman was given the first Sir Charles Wheeler award commemorating the late journalism great, and Boris Johnson made a surprise appearance at the conference.

Over 50 academics and industry workers were shadowed by an equally large crew of students who interviewed, videoed, edited, uploaded, tweeted and blogged throughout the two days, as important points on the state of journalism were made.

Some notable successes in-house as well. All the coverage on Westminster News Online (video, photographs and articles) was undertaken by students across our graduate and Masters programes in journalism and television.

Externally you can find a host of links from Journalism.co.uk
Disclaimer: The University of Westminster is not responsible for external links