Dr Maria Christina Georgiadou, Reader in Property and Construction, and her research project, ISULabaNtu, hosted its first round of dissemination events in Duban, KwaZulu-Natal in South Africa. 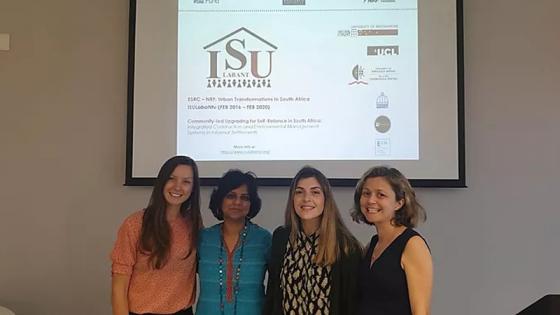 ISULabaNtu is an interdisciplinary research project undertaking data collection, capacity building and community mapping, in collaboration with residents from the Durban Metropolitan Area, to develop and test an integrated ‘Collaborative Environmental and Construction Management Toolkit’ to enhance community self-reliance in informal settlements. It is funded by the Economic and Social Research Council under the Newton Fund Urban Transformations Programme.

The two-day event entailed a multi-stakeholder workshop at the University of KwaZulu-Natal (UKZN) and a community event in Havelock, which is an informal settlement in Durban North where the project team having been working with extensively.

A common message in all of the presentations given was the need to accept informality and work with it, instead of trying to eradicate it. There was a call to go beyond participation only and to promote deep facilitation, for example, self-reliance and self-upgrading of the communities and by the communities in need of settlement upgrading. Questions around access to water and sanitation, access to energy and the sustainability of urban agriculture in the context of the broader challenges of infrastructure provision and improvement were also discussed.

Solid waste management (SWM) was among the key themes seen as needing attention, including finding ways of more effective waste removal and more awareness raising and education on SWM and recycling.

The second day in Havelock, which was supported by the UKZN team and uTshani Fund, was organised to discuss the progress of the project with the wider community and brought together the different stakeholders who have been a part of it, particularly UKZN, NGOs and local partners.

A draft practical guide for communities was shared with the wider community to gather further feedback to ensure most important aspects of ISU are captured.  A key objective was to transfer the ownership of the guide to the community itself and to stimulate its use and share with other settlements.

Key challenges faced by the community were also highlighted. They include, among others, lack of hot water provision, lack of lighting, intermittent electricity provision and no efficient strategy on SWM which contributes to the challenges associated with poor housing conditions and difficulties of moving around on narrow, uneven foot paths.

The residents opened the event with a prayer, uniting everyone in contemplation. Grace was given through short speeches and through songs. It turned out to be a day filled with residents’ performances and discussions around the needs of the settlement, as well as the progress that has been made since the start of the project.

The event closed with a shared meal prepared by the community and was followed by a closing prayer.