On 20-21 May, the University of Westminster hosted the 6th ICTs and Society 'Digital Objects, Digital Subjects' conference. 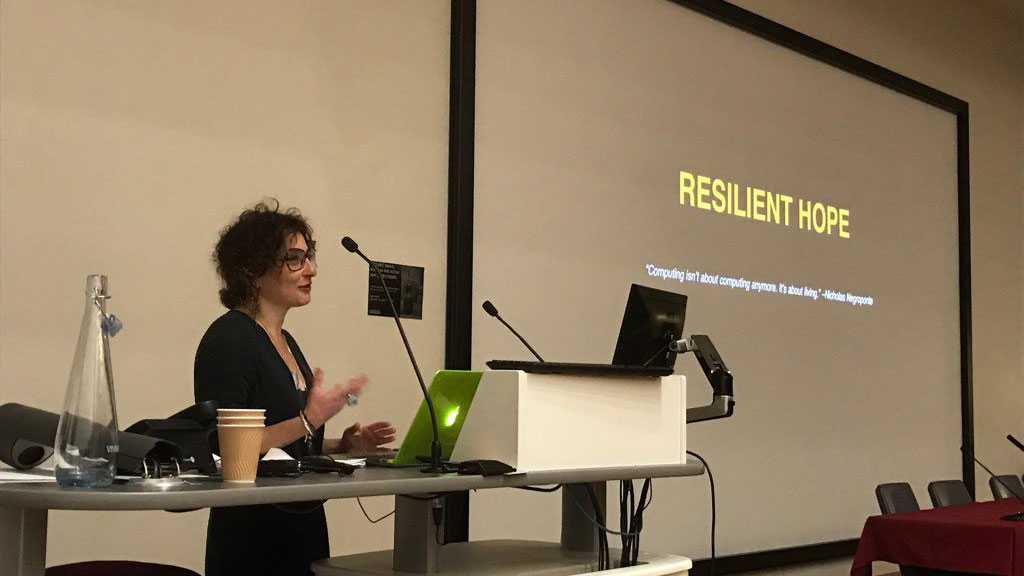 The Westminster Institute for Advanced Studies (WIAS) and the Centre for the Study of Democracy hosted the symposium, which featured ten expert talks and was attended by around 300 participants .

ICTs and Society is a conference series that has been organised since 2008. Previous conference locations have been Salzburg, Trento, Barcelona, Uppsala, and Vienna.

The event brought together interdisciplinary perspectives on big data in a dialogue between scholars with backgrounds in media and communication studies, political science, philosophy, international relations, legal studies, urban studies, arts, design studies, architecture, and computer science. The symposium asked: What do objects and subjects, activism, research and critique look like in the age of big data capitalism?

The first day featured five talks. In her opening talk, Kylie Jarrett (Maynooth University, Ireland) stressed that there is a long history of unpaid labour, including housework, that in the digital age takes on new forms. Etienne Turpin (MIT, anexact) reflected on the possibilities of using data for strengthening social resilience in megacities, such as Jakarta, that face consequences of climate change and rapid development. Orit Halpern (Concordia University, Canada) investigated claims that big data and smart, ubiquitous infrastructures can solve the crises brought forth by what Naomi Klein terms disaster capitalism. Christian Fuchs (University of Westminster) argued that critical political economy is a crucial approach for understanding big data capitalism’s contradictions and stressed the importance of projects that advance the digital commons. The philosopher Toni Negri argued against techno-pessimism and catastrophic views of technology and societal development. He stressed the importance of finding ways of how digital machines could be appropriated and turned into alternative technologies.

The second day started with a talk by political theorist Jodi Dean (Hobart and William Smith Colleges, USA), who argued that communicative capitalism produces crowds that are an opportunity for politics and for the formation of collective political subjects. Paolo Gerbaudo (King’s College) analysed how new platform parties (Podemos in Spain, the 5 Star Movement in Italy, various Pirate Parties) use digital media as forms of political organisation, collaboration and decision-making. Antoinette Rouvroy (University of Namur, Belgium) analysed how big data capitalism has created new forms of governmentality (algorithmic governmentality) that take data as facts and undermine human reflexivity. Jack Linchuan Qiu (Chinese University of Hong Kong) analysed new forms of slavery that have emerged in big data capitalism, including Chinese ICT assemblers and consumers slaved to the purchase and use of new digital gadgets. David Chandler (University of Westminster) argued that big data capitalism’s sensors bring about new ways of seeing and sensing, and thus a world in which a war on distinctions and meanings collapses representation, causation, theory, subjects and objects and creates a virtual world of dynamic correlations.

Conference co-chair Christian Fuchs commented: “Big data advances a logic that aims to replace human activities and decision-making by algorithms operating on a massive volume of data. The ICTs and Society conference has advanced perspectives that deconstruct big data fetishism and stress that humans, human qualities, and human interests are central to the digital world. We should advance from digital humanities and computational social science to digital humanism and critical digital media studies”.

Conference co-chair David Chandler said: “The Centre for the Study of Democracy was delighted to co-organise the Digital Objects, Digital Subjects conference. It was a very special weekend, full of interdisciplinary debate and discussion, wonderfully led by the keynote speakers who enabled us to bring some of the best contemporary philosophical, political, social, media and design theories together in a critical engagement with Big Data and the digital.”

The videos of the presentations will be published in due time. University of Westminster Press will publish an open access book that will bring together the conference talks and comments. To receive updates about these forthcoming publications, you can subscribe to WIAS’ newsletter.