His Holiness, the Dalai Lama, today visited the Old Cinema at the University of Westminster’s Regent Street campus to present a lecture to students on the ‘Values of democracy and Tibet’. This is the first time that he has visited the University, which was chosen because of the broad diversity of its student body and its particular research interests in Tibet. 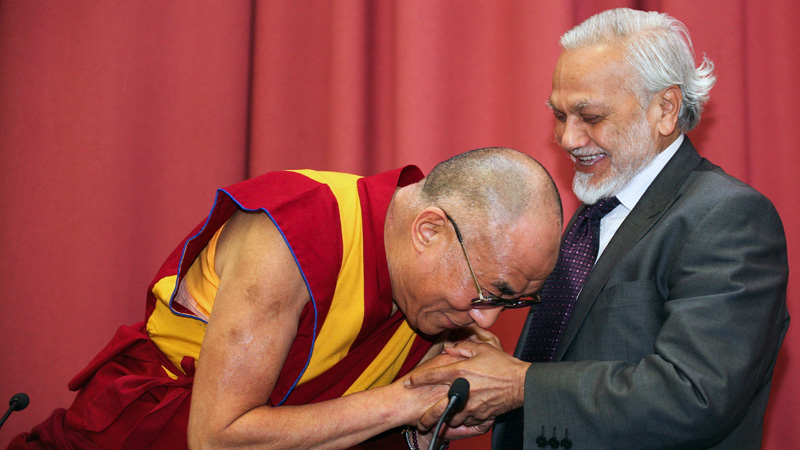 During his presentation to more than 300 students, His Holiness discussed why democracy is important for China and Tibet and pondered whether democratisation is a solution to the Sino-Tibetan dispute. He also talked about why the world should care about Tibet, why people living in London, far away from Tibet have concerns over what is happening to the Tibetan people, and where hope in China-Tibet relations lies.

His Holiness talked about his relationship with India, stressing the best traits of the nation as well as an understanding of what is needed to aid improvement. In response to student questions, he highlighted the importance of education and respect for each other, no matter what an individual’s political or religious beliefs were and reiterated his commitment to seeking genuine autonomy using non-violent methods within China. He mentioned a new initiative to promote secular ethics in education and advised the University to adopt it as an experiment in the near future.

The visit to the University of Westminster forms part of His Holiness’ nationwide UK trip where he has been reaching out to a number of young people to spread his message of non-violence, dialogue and universal responsibility.

Dr Dibyesh Anand, Research Director at the Department of Politics and International Relations at the University of Westminster said: “The Dalai Lama is a huge global icon and a great religious scholar. It was a real privilege for us to be able welcome him and hear his ideas and The Dalai Lama himself said he enjoyed being with such a diverse and ‘attentive’ body of students who seized the opportunity to interact and question him on his views.

“This event is part of the University of Westminster’s ongoing commitment to high-quality research and teaching as well as providing continued opportunities to engage with political developments in China and India in general and Tibet in particular.”