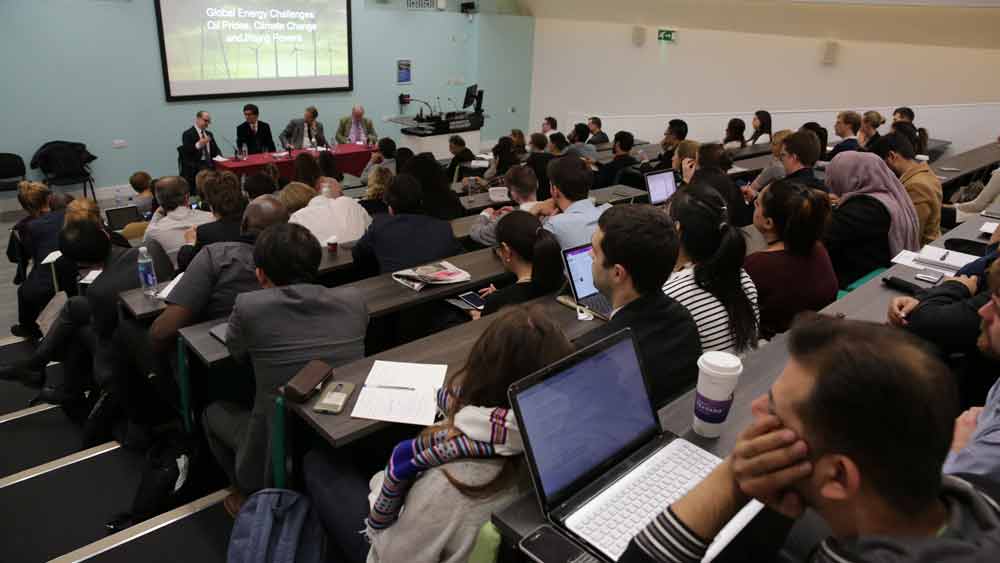 This degree incorporates international relations, law, business and sustainability studies, combining the expertise of staff from the Faculty of Social Sciences and Humanities, Westminster Business School and the Faculty of Architecture and the Built Environment.

Three expert speakers participated in a panel debate that sought to provide new perspectives on world energy prospects and challenges. The event was chaired by Deputy Vice-Chancellor Professor Roland Dannreuther.

In their talks, the speakers addressed the following question: how are fluctuating oil prices, climate change, the Paris Agreement and rising powers affecting the global politics of energy?

Professor Paul Stevens, a distinguished fellow at Chatham House and specialist in the international petroleum industry, largely concentrated on the issue of oil prices. In his presentation, Professor Stevens provided historical background into the role of the Organisation of Petroleum Exporting Countries (OPEC), considered the current state of the oil market and talked about its potential future. He concluded by saying that oil prices are likely to become more volatile as the market becomes increasingly competitive.

Dr Robert Falkner, Associate Professor of International Relations at the London School of Economics and Political Science (LSE), expanded on the Paris Agreement – what to expect from it, how it might affect global energy markets and oil in particular. He argued that in order to address the major issue of climate change, pressure from both civil society and the business lobby on a national scale could play an effective role. He further emphasised the importance of a reduction in the usage of coal.

Dr Tom Wales, Group Political Adviser at BP’s Government and Political Affairs section, addressed the question from the perspective of rising powers.  He commented on the divergence between the rhetoric of South and Southeast Asian countries on climate change and the political imperatives that constrain the policy choices of their leaders. In Asia, Dr Wales outlined, energy means development and prosperity and therefore coal will remain dominant for Asia’s electricity market as it is the cheaper option. He also argued that electricity production in new coal-fired power plants will likely increase in the coming 10-15 years.

All in all, this event provided a fitting and interesting introduction to some of the key themes and questions that will be explored by University of Westminster students who have just embarked on the Energy and Environmental Change MA.

Join our FREE online information session about the Energy and Environmental Change MA on 2 November 2016, 1.30–2pm.