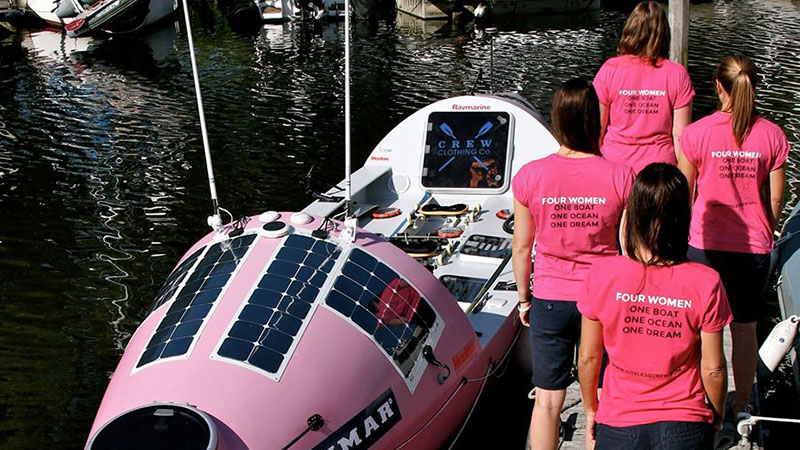 In an amazing feat of perseverance, bravery and endurance, the Coxless Crew rowed for 257 days, covering 8,446 miles (13,593km) from San Francisco to Queensland, Australia. This involved rowing for 24 hours a day in shifts of two hours, sleeping for no more than 90 minutes at a time, and living for weeks on a 29-foot boat named Doris with only a small cabin the size of a two-man tent.

This incredible journey has so far helped to raise over £40,000 for women’s charities, including Walking for the Wounded’s fund for injured servicewomen, and Breast Cancer Care, a UK-wide charity which provides specialist support for the 55,000 people diagnosed with breast cancer each year.

Meg, who graduated in 2014 with a degree in English Literature, joined the team for the last leg of their journey from Samoa to their final destination of Cairns. Now back on dry land and speaking to us from a hotel overlooking St Paul’s Cathedral in London, Meg tells us about her adventure.

Congratulations on being part of the first all-female team and first four-person team to row the Pacific. What does it feel like to have made history?

It is a really exciting time as we just had our world record confirmed when we were on The One Show. I honestly don’t feel like my feet have touched the ground. Excited, proud, surreal – any of these words could describe how I feel. I think we all need a week to adjust and get back to reality.

What is it like to be back on dry land, and what was the first thing that you did when you reached shore?

We were all really wobbly! I think we must have all looked drunk when we came off the boat; we were all over the shop! The first thing I did was hug my mum, as my family was in Australia for my return.

And we’ve all been getting used to sleeping normally again as when we were out on the ocean we had to practice a polyphasic sleep pattern, where you sleep multiple times a day for no longer than 90 minutes.

While you were at the University of Westminster you climbed Kilimanjaro as part of the International Development Society and climbed Machu Picchu with the Raising and Giving Society. Did these experiences help you in gaining the skills you needed for the row across the Pacific?

I was the expedition leader for the Machu Picchu trip which helped me develop team work and leadership skills. I made some amazing friendships on these expeditions that I still have to this day. At the University it is important to put yourself out there 100 per cent and join loads of societies. University of Westminster is a very multicultural university and through the societies I was able to meet people from different cultures and backgrounds. They were a fantastic experience.

What was the biggest challenge or hurdle that you faced when you were out on the waves?

Having to overcome fear itself. We were rowing in shark-infested waters and we still had to get in the water to do things like scrape barnacles off the boat, while someone else literally had to be on shark watch.

We got over our fear by naming the sharks. They were all boys – our only male company – and they were Spanish. Fernando circled the girls on their first leg of the journey before I joined. Edwardo followed us for 10 days. And Tinto - which means stupid in Spanish - spent two hours trying to bite the boat. When they had names they suddenly didn’t seem so intimidating anymore!

Did you have time to appreciate the experience and the amazing sea while you were out there? What is your most amazing memory that you will take away?

Sometimes the sea was so flat that you could see your reflection in the water. Whales would pop their head out of the sea and sometimes you would see a turtle swimming towards you. Imagine seeing the wide sea all around you with Morcheeba coming out of the speakers. We had solar panelled speakers so we could only use them when they were sunny but when we were able to use them, it was amazing. It would make you forget the pain of rowing.

What did you find most unexpected about the experience? Was there anything that you didn’t predict?

It was the waves. I hadn’t thought about what it would be like when the sea was rough. And the darkness: for one week a month there is absolutely no moon and you are rowing in pitch black. Waves the size of houses would be knocking the boat around in the darkness. There were terrifying moments, but you had to just keep rowing.

By the end of your journey, what were you most looking forward to?

Hummus! The food we had on board was all rehydrated food made by adding hot water; it was like eating baby food. So now it’s amazing to be able to eat fresh food – like avocado – and be able to chew. Also to have a duvet – I can’t wait to get home to my duck-down duvet.

You can also read about their fascinating journey in the team’s blog.