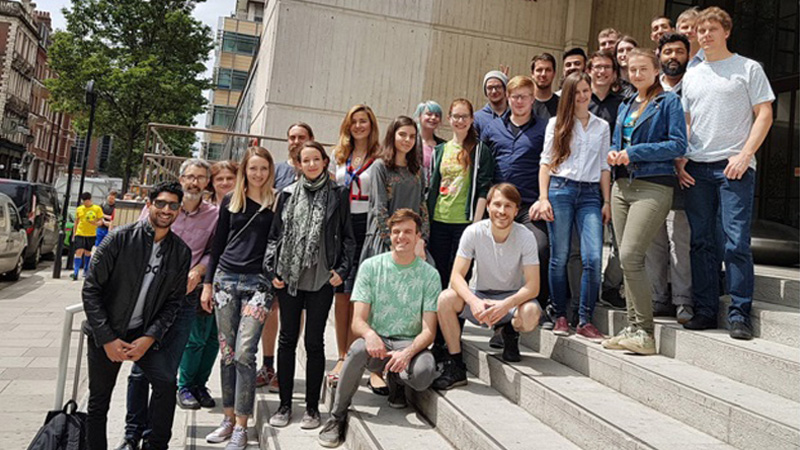 The aim of this project was to expose students to real environment conditions of team working and new ways of working collaboratively using online tools, featuring a combination of remote working and mobility activities.

Students met twice, in Austria and the UK, once to decide on the formation of teams and the initial concept of the games, and to complete and present the final output. Student mobility was supported by the Distant Horizon’s scheme at the University of Westminster and Erasmus.

The project presents an exciting opportunity for students to acquire technical, creative and transferable skills valuable for their professional development. In addition, it helps the students to enrich their portfolio and increase their employability opportunities, as it is recognised as part of the students’ Higher Education Achievements Record.

Thirty-four students from the two countries participated in the project this year. Over the years, students from a wide range of degrees, including Politics and International relations, Law, Biomedical Science, Fashion and Audio production, have taken part.

The theme for games to be developed in the Hackathon this year was ‘binary diversity’ and it resulted in the production of five games. One of the games, Klaxo, a multiplayer hide and seek game where players have to hide in a crowd of intelligent virtual humans and the aim of the game is to discover the humans without being identified, won an award of best project based on technical challenges and implementation of the design concept. While another game, Shift, a dungeon crawler puzzle game, with main objective to defeat various types of enemies and loot dungeons has already been published and can be downloaded here.

The completion of the projects has been marked with invited talks by games industry experts, including Filip Healy, User Research on VR and AR at Threesixty Reality, Dan Da Rocha, award-winning game designer and producer at Toxic Games and Allan Rankin, VR tracking technologies expert at Target3D. The best projects and teams are supported to develop their games further and take part in game competitions.

Sample of the student projects can be found here.