Dorrie Chetty, Senior Lecturer in Sociology and Course leader for Sociology and Criminology, spent two weeks teaching Sociology at Panjab University in The Institute of Social Sciences Research and Education, in India. 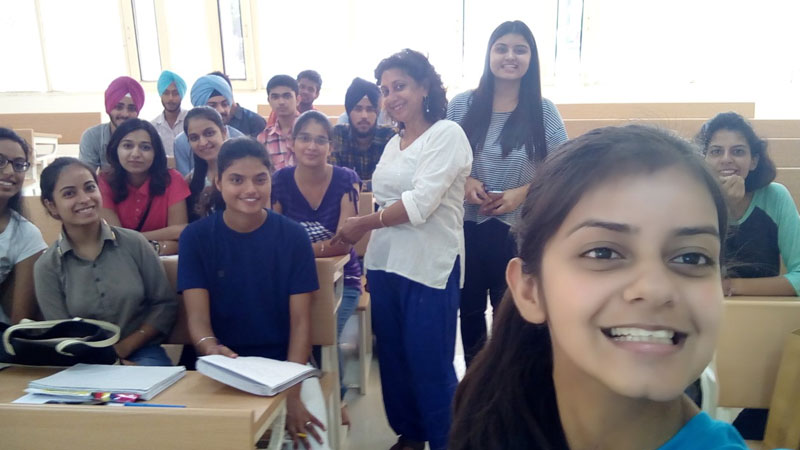 A Punjab University student, Swati, who took part in Dorrie Chetty’s lectures, said: “Students felt a certain sense of freedom in expressing their ideas, opinions and analogies and asked questions which they always had but dared to ask. They debated in class and it incited them to research further on the themes of their choice.

“The sessions conducted were very interactive and unique, because similar exchanges are rare, and only few educational institutions have been able to execute it.”

Dorrie Chetty was invited by Professor Deepta Gupta, the Dean from the International Students’ Office, and Professor Reeta Grewal, Coordinator at the Institute of Social Science Education and Research to come teach first year undergraduates.

Dorrie Chetty said: “My trip was a great opportunity to lecture in a different environment. I gained significant experience working in a new cultural environment. Both students and staff at Panjab University in Chandigarh were very welcoming and appreciated the lectures I gave.”

As this was Dorrie’s first time in India Punjab, University organised extra-curriculum visits to give her the full experience. She took trips to museums, galleries, gardens and restaurants.

She also met with other faculty members from History and Criminology and attended lectures including one by India’s distinguished poet Sampooran Singh Kalra. More popularly known as Gulzar, he is also famous for his lyrics, including his collaboration with A.R. Rahman on Danny Boyle's film Slumdog Millionaire, for which they won an Academy Award for Best Original Song ‘Jai Ho’.

Dorrie Chetty praised the trip highlighting her visit to Simla and highly recommends the teaching abroad experience to her colleagues.

She said: “What I found most fascinating was a weekend trip to Simla, where I stayed at the university guest house of the Institute of Advanced Studies. The Rashtrapati Niwas, also known as Viceregal Lodge, was formerly the residence of the British Viceroy of India where the British entertained their guests during the British colonial era.

“It’s also the building where negotiations of the partition of India took place. In effect Simla is where the British ruled India during the months of March to October, escaping the heat and dust of the rest of India. The British presence is still very much in evidence in the furniture and in the botany of the gardens, where many plants imported from Britain still thrive.

“Altogether, my visit to Chandigarh and Simla was a stimulating experience which I would highly recommend to others.”

Student and staff mobility with Panjab University are currently under negotiation.

Swati from Punjab University is co-author of this article.

Professor John Owens for Express about the US election