Donate your old CRT television for a major exhibition by video artist David Hall featuring an installation of 1001 TV sets! Internationally recognised for his ground-breaking work David Hall is considered the most influential pioneer in the field of video art in Britain. 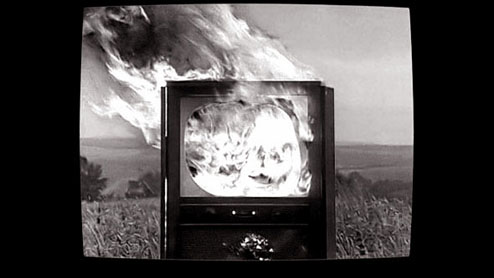 To have your old television used in this exhibition please email us at [email protected] with the brand, model number and your address and we will collect it.

This is a chance to give your old TV a last home in a striking public event and have it collected for free.

David Hall’s ‘1001 TV Sets (End Piece)’ will be exhibited at Ambika P3, University of Westminster as part of his solo show between the 9 March and the 15 April 2012.

‘A single figure dominates the beginnings of video art in Britain - David Hall, and his early experiments with broadcast television are unique. Not only are many of his video pieces classics but he has made important and often brilliant contributions to experimental film, installation and sculpture. A successful sculptor in the 'new generation' school of the 1960s he turned his attention to the less tangible media of photography, film and video. A founding member of the video art movement here in the early 1970s, Hall was an influential activist on behalf of the infant art form.' 1

Internationally recognised for his ground-breaking work in the field of video art, David Hall has often been cited as its most influential pioneer in Britain. Hall started his work as a sculptor and was awarded first prize for sculpture at the Biennale de Paris in 1965 and the following year took part in Primary Structures, New York, an exhibition that marked the beginning of Minimalist art. Documenting his work caused him to question the use of photography and led on to work in film and video. Soon he was using these mediums to make single screen and installation work and exhibiting internationally at many venues including Documenta Kassel, Tate Gallery London, Centre Georges Pompidou Paris, Museum of Contemporary Art Barcelona, National Museum Reina Sofia Madrid and the Museum of Modern Art Vienna.

His first works for television appeared unannounced on Scottish TV in 1971. The transmissions were a surprise, a mystery, and have been acknowledged as the first artist interventions seen on British television. An installation version of these early ‘TV Interruptions’ will be exhibited in Ambika P3 alongside ‘Progressive Recession’ a multi-screen interactive work utilising 10 cameras and 10 monitors as complex analogical mirrors.

The contemporary reworking of one of Hall’s early major works ‘101 TV sets’ will form the centrepiece of the exhibition. This multi-channel live broadcast television installation was first shown in 1972 as ‘60 TV Sets’ at A Survey of the Avant-Garde in Britain, Gallery House, London, and subsequently developed into ‘101 TV Sets’ at the seminal Video Show, Serpentine Gallery, London in 1975 2. The new configuration at Ambika P3 is a major update and expansion of the work that will both restate its value as an intervention in the visual and media arts and also as a fitting marker of the end of analogue broadcast in the UK.

The challenging construct utilising a spectacular 1,001 cathode ray tube TV sets of all ages and condition will fill the massive space. Each will be tuned to a different analogue station playing randomly in a cacophony of electronic signals until, between April 4 and April 18, when the last analogue signals are broadcast from London’s Alexandra Palace and transmission is turned off, the multiple sets will emit only terminal audio hiss and a visual sea of white noise.

This timely exhibition will celebrate and examine some of the earliest work of the founder of much of what is now termed ‘Video Art’ in the UK today and also signal the end of its forebear television as a linear analogue broadcasting medium. The cut off of the analogue signal marks the technological break with the idea of a curated television culture and the move to a pay-as-you-go culture of spectatorship on multiple devices. In an atmosphere of media overdose, this sculpture of a thousand lights will explore the form and illusion of the medium. Hall’s staging of 1,001 TV’s also confirms the strength and cultural resonance of his continual intervention into the privileged space of the gallery armed with the shape, noise, smell and light of the television set itself.

2. The two early versions were made in collaboration with the late Tony Sinden.

In March and April 2012 Ambika P3, the flagship exhibition space at the University of Westminster, will present a major solo exhibition of the influential pioneer of video art, David Hall. To mark the occasion the Centre for Research and Education in Arts and Media (CREAM) of the University of Westminster is convening Exhibiting Video, a three-day event considering issues central to the display of video art. Bringing together notable artists, curators and writers the event will provide a forum for a number of related questions.