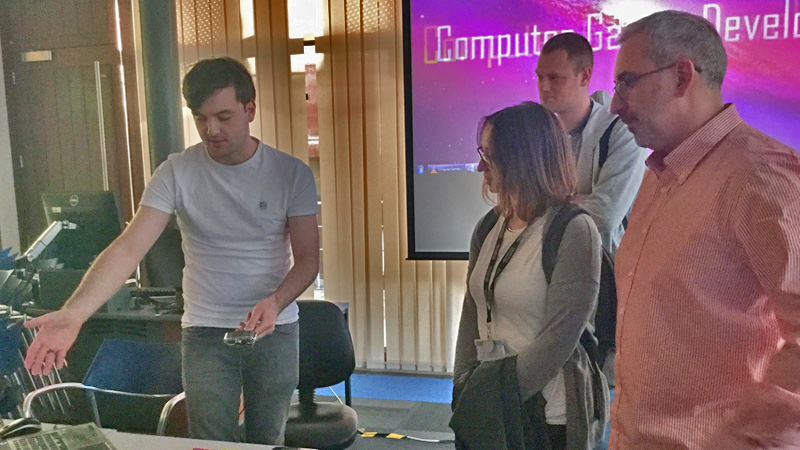 The students demonstrated final year project work as well as other portfolio work, and had the opportunity to network with guests and obtain feedback from professionals in the industry. “The visitors had much fun playing, exploring and discussing projects while meeting the creative developers,” added Markos Mentzelopoulos, Course Leader for the Computer Games Development BSc Honours course.

The Digital Showreel was an important strand of the annual Faculty Enterprise Day which showcased the University’s Faculty of Science and Technology’s activities within themed areas as part of London Tech Week.

Ashif Tejani, Department Enterprise Coordinator and Course Leader for the Interaction Design and Computing MSc course, said: “The demonstration of highly rich and innovative projects by our graduates was a valuable opportunity to present the calibre of our students, teaching and potential for collaboration with the broad range of commercial and non-commercial activities.”

Among the games exhibited was Essense Quest which is a multiplayer RPG (Role Playing Game) PC game that can be played over a LAN or across the internet. The project, developed in Unity engine by Benjamin Foote, focuses on the fundamental principles of developing a networked game as well as those seen in many MMO (Massively Multiplayer Online) RPGs and creature trainer games. The project demonstrates strong skills in game development and networking programming learnt within the University.

Another Westminster student project shown to guests was KETSUPCHUP which is a Virtual Reality flying simulator adventure game deployed on mobile VR (Samsung Gear VR). The players can fly around the town, avoiding buildings and enjoying the scenery. The aim of the game is to ‘sauce’ as many enemy avatars and score as many points as possible before the time is up. The look and feel of the game is cartoonish in style, and the pick-up-and-play nature of the game appeals to a broad demographic of players.

The Department of Computer Science is looking to expand this event over the next few years, incorporating activity from the other related undergraduate and postgraduate courses and building an industry network from advisors that will contribute in the Computer Science field.

Watch the video showreel to get a taste of University of Westminster students’ work.