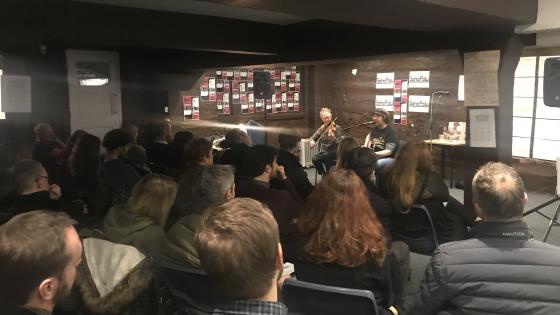 November was a busy month events wise. In particular, the centre was heavily involved in the Being Human Festival. This was the third time we had received funding from AHRC/BA to put on events and we put on a week of events under the banner of “Digging Deeper’, excavating further the pre-history of our famous basement, The Soho Poly. We ran four events during the week - a fanzine worskhop overseen by Dr Hannah Copley, A Climate Crisis event including three short plays and a talk from Greenpeace, Martin Stephenson performing the first gig in the space for 50 years and a Pop, Politics and PCL celebration. More details of these including videos and other ephemera will appear on our Soho Poly and Disrupt your Everyday pages in due course.

Other events during November included three more Theory meets Practice masterclasses on publishing and recording contracts, delivered by Robert Allan and Ed Weidman, and a Film Matters’ screening of the documentary Dear Censor.