Burning Man Arts selected Westminster Lecturer Arthur Mamou-Mani’s Galaxia design to be the 19th incarnation of the Temple, which will be built and then sent up in flames to mark the end of the Burning Men Festival this year. 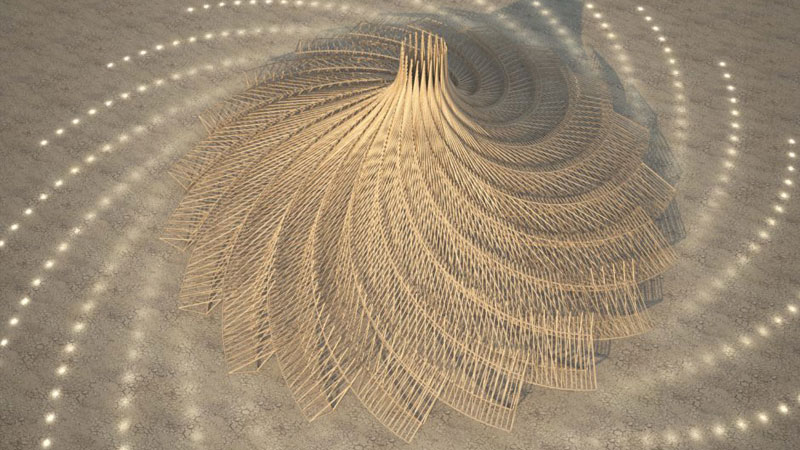 Named Galaxia, this year’s Temple will be built from 20 timber trusses that spiral up and form a tower as they converge. The triangular trusses will create different paths into the centre of the pavilion, where a giant 3D-printed mandala will be placed. Small alcoves along the routes will provide spaces for visitors to write and reflect.

Galaxia is described as a 60m by 20m high structure that “celebrates hope in the unknown, stars, planets, black holes, the movement uniting us in swirling galaxies of dreams. A superior form of Gaia in Isaac Asimov’s Foundation series, Galaxia is the ultimate network, the fabric of the universe connecting living beings into one entity.” Galaxia will be pre-fabricated at the Generator, a fablab owned by Burning Man in Reno.

Mamou-Mani said: “Religions throughout history have often taken the sun as the divine figure. With our current knowledge of astronomy, we know the sun very well but one thing we have not yet visualised are black holes. They shape our galaxies into a swirling dance of stars and planets, they might connect us to parallel universes, they are one of our biggest unsolved mysteries. I find this extremely spiritual and enjoy the fact that science, not just beliefs, can shape our spirituality as this is a secular temple. Humans have a spiritual calling, so a universal symbol of where we all are, galaxies (and possibly our alien neighbours) would be perfect for this project.”

David Best and Jack Haye brought their Temple of the Mind to the festival in 2000, a structure that would become the first of a long line of Temples. When their friend and fellow Temple builder, Michael Hefflin, tragically died in a motorcycle crash prior to leaving for Burning Man, already erected, the art installation became a memorial to him.

Since then the Temple has become a treasured component of Black Rock City and communities around the world, providing a place for all to embrace and let go of trauma, loss and pain that are inevitable parts of human existence. It welcomes all visitors to participate, bring offerings, mementos of loved ones, write, cry and meditate. On the final day of Burning Man, the Temple is burned as a symbolic gesture to bring closure and healing.

For the past six years, Arthur Mamou-Mani, together with Toby Burgess, and their students from Design Studio 10 (DS10) on the Master of Architecture (MArch)(RIBA pt II) course at the University of Westminster, have been bringing art installations to Black Rock City, including Shipwreck, Fractal Cult, Hayam Sun Temple, The Infinity Tree, Reflections and Bismuth Bivouac.

By Mamou-Mani encouraging his students to design and build art installations at Burning Man, they are able to receive on-site mentorship and unique hands-on building experience.

Their structure Tangential Dreams, won the prestigious Architizer A+ Award in architecture in 2016 and was highlighted as one of the best temporary structures from Burning Man festival in 2016 by architecture and design magazine Dezeen.

Learn more about studying on the Master of Architecture (MArch)(RIBA pt II).

Visit the blog We Want to Learn, run by Arthur Mamou-Mani and his students from DS10.