On 8 November, a group of final year BSc Building Surveying students had the opportunity to visit Buckingham Palace to gain an understanding of their 10-year Reservicing Programme. 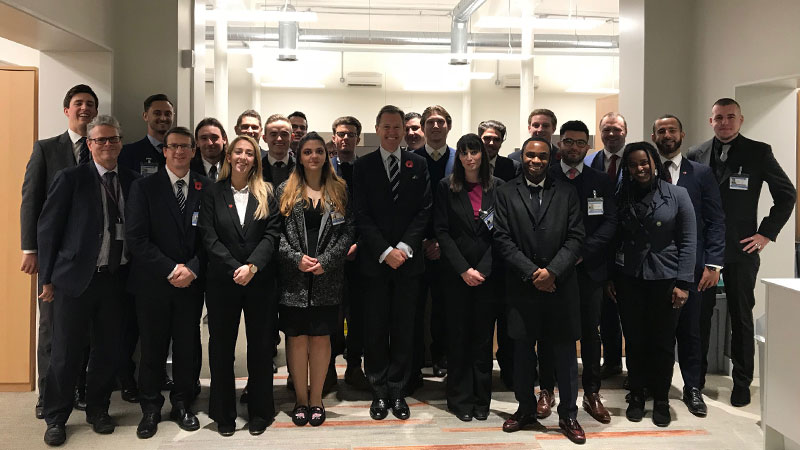 The visit, coordinated by Mark Ferguson, Senior Lecturer in Building Surveying, contributed to enhancing students’ learning experience by bridging the gap between universities and the workplace. Students were welcomed by members of the Programme Management Office, which were followed by presentations from the respective Project Managers. They provided an insightful overview of the scheme which began in April 2017. The Master of the Household and Senior Responsible Owner for the Reservicing Programme, Vice Admiral Tony Johnstone-Burt CB OBE DL, then welcomed the students and gave a positive talk about the profession that they have chosen to pursue and the opportunities that lie ahead. They then had the chance to visit site works and State Rooms, which are used for welcoming guests and official functions.

The last major reservicing of the essential systems in Buckingham Palace, consisting of electrical wiring, heating, hot and cold water pipework and drainage systems, took place in the 1950s after the Second World War. The current reservicing programme is fundamental to reducing catastrophic risks such as fire and flood, and to ensure the continuing operations of the Palace.

Several of the core modules in the final year of the Building Surveying degree course are directly related to the professional role of the Building Surveyor, with modules titled, Applied Building Surveying, Building Pathology and Care and Adaptation of Buildings. Such modules use authentic assessment methods to enable students’ development of knowledge, skills and competencies that they will go on to use in their professional careers. With Buckingham Palace remaining open and operational throughout the Programme, students were able to see the technical logistics of such extensive works being carried out in one of the most high-profile and iconic buildings in the world.

Students also had the chance to watch a skilled tradesman apply lime plaster to the walls, and inspect access panels that had been created for the large chandeliers hanging underneath. Other works included a newly constructed floor with steel spanning across to sit above the State Rooms below to create a separation and avoid any disturbances. Students were able to gain an understanding of the difficulties that come with managing a site that has so many restrictions and security measures in place.

Katie London, final year student in BSc Building Surveying, shared her thoughts on the visit: “The trip to Buckingham Palace was really enjoyable. It was amazing to see the famous rooms and gain an understanding of the logistics involved in running a project on a building with so many demands. I look forward to seeing the progress next year!”

Fellow student, Lewis Merle, said: “The site visit to Buckingham Palace was very insightful in understanding how much planning had been put into the phasing of works to ensure the building could remain occupied and used by the public whilst the work goes on behind the scenes. Overall it was an invaluable experience and it inspired me to think that I could be working on a prestigious project such as this one day!”

Mark Ferguson, who organised the trip, also commented: “What can I say! The hospitality from all was unbelievable. The way in which the site was explained with the thought-through introduction and the following site and State Room walks really contextualised what we have been discussing in lectures. It was also really nice that Tony took the time out of his day as Senior Responsible Owner for the Reservicing Programme to come and talk to the students. We are very grateful for this opportunity.”

The same group of students will be returning to the Palace in February 2019, when they will be able to inspect the progress of these works and visit the East Wing where additional rewiring is being carried out.