James Camp was nominated by the University’s Department of Life Sciences for the British Pharmacological Society’s (BPS) Pharmacology Prize 2016. The Pharmacology & Physiology BSc Honours alumnus won due to his excellent performance in his studies. 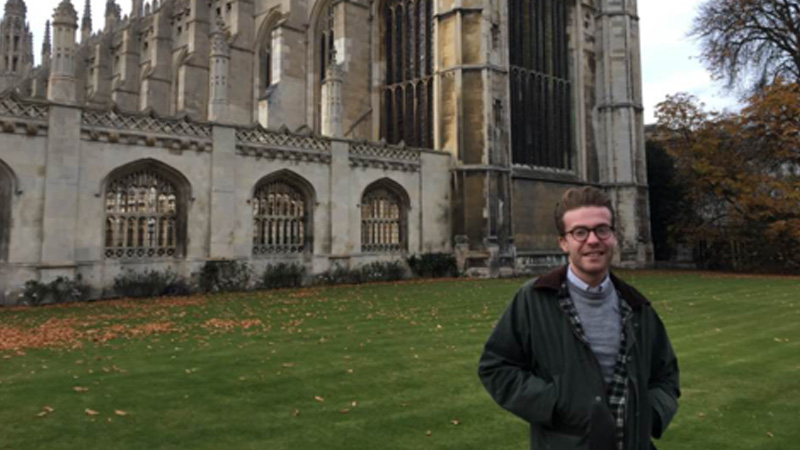 Founded in 1931 BPS is a charity that works to explain and promote the importance of Pharmacology in the modern world. They have over 3,500 members in over 60 countries.

James was awarded a prize of £500 for his experimental final year project in Pharmacology as well as his excellent performances throughout his studies. Speaking about the prize and his experience at the University of Westminster, he said: “Receiving the BPS came as a massive surprise and finished off an already overwhelming experience being at Westminster.

“Throughout my time there I met some unforgettable people – not only my classmates who helped me survive those late night study sessions, but the diverse network of friends that gave me a link (and a place to stay) in the rest of the world.”

James is currently studying MPhil in Clinical Science: Experimental Medicine at the University of Cambridge. He said: “Without the support I received from my friends and the Faculty (at University of Westminster), I know I wouldn’t be in the position I am today.”

Westminster Pharmacology Senior Lecturer Christopher Biggs said: “James is a worthy recipient of the BPS Pharmacology Prize. The fact that there were only nine other awards made nationwide in the last academic year, highlights just what a fantastic achievement this is.

“The Prize was awarded in recognition of his outstanding performance across all his pharmacology related modules, throughout his time with us here at Westminster. We wish him heartfelt congratulations and great success in his postgraduate studies: Well done James!”

Pharmacology is a vibrant area of Biomedical Science that studies drug action which is how medicines and other drugs work and are processed by the body.

It is crucial for discovering new medicines to help fight diseases such as cancer, depression, heart and infectious diseases.

It helps improve the effectiveness and reduce the unwanted side effects of medicines, and understand why individuals differ in the way they respond to certain drugs.